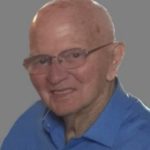 Burton was born on May 27, 1932, at Allen Memorial Hospital in Waterloo, Iowa, the son of William “Bill” and Nellie (Matthiesen) Boevers. Burton was baptized on June 12, 1932, at St. Matthew’s Lutheran Church in Readlyn and was confirmed on April 11, 1946, at St. John Evangelical Lutheran of Crane Creek. Burton attended grade school at Maxfield #2, and graduated from the Readlyn High School in 1951. Following his schooling, Burton helped on the family farm. On October 12, 1952, he was united in marriage to Delores Mae Oltrogge at Zion Lutheran Church in Readlyn. The couple made their home on the Boevers family farm, located 2 miles east and ¾ mile north of highways 3 & 63. On June 5, 1953, Burton entered the U.S. Army during the Korean Conflict. Burton served with H. Company, 47th Infantry Regiment, where he served in Germany for 15 months. Burton was honorably discharged on March 4, 1955. Burton then returned home, where he continued to farm until he semi-retired in November of 1987, and the couple moved to Waverly, making their home at 1208 Park Avenue.

Burton was a faithful member of St. John Evangelical Lutheran Church of Crane Creek, rural Tripoli, where Burton served on the church council, as Sunday School Superintendent, and was a member of the Won by One Choir. He was a member of the American Legion Post #176 in Waverly, where he served as an officer and was very active in the Honor Guard. Burton enjoyed volunteering at the Waverly Health Center, farming, fishing, woodworking, as well as many trips throughout the U.S. with Delores and friends. First and foremost, he loved spending time with his children, grandchildren, and great-grandchildren. Burton’s family was his greatest treasure.