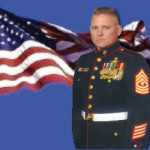 Sergeant Major Morgan’s 1st Anglico Company specializes in air and Naval gunfire logistics intelligence, as well as reconnaissance missions. This Special Forces unit that Sergeant Major Morgan is responsible for is made up of 200 Marines, 4 Navy Corpsmen, and 1 Iraqi interpreter. They are a smaller unit but very effective.

The 1st Anglico Marine’s have been in Iraq since August 2006. They have just spent the second Holiday season in a row away from their families. For Barry this means not being with his wife Tina and their 6-year-old son Jacob. He misses his family and friends, but he has a job to do. “This is my job and I am good at it,” Morgan says. “I do this so that hopefully our kids do not have to.”

Sergeant Major Barry Morgan is indeed good at his job. This spring when he returns he will be awarded The Bronze Star Medal. This is an award for bravery, acts of merit, or meritorious service. When awarded for bravery this is one of the highest combat awards of the United States Armed Forces. We should all be proud of the United States Armed Forces and Marines like Sergeant Major Morgan for “just doing their job”.

Waiting his safe arrival his wife Tina and son Jacob of Oceanside, California, parents Harold and Lana Morgan, brother Brad Morgan all of Waterloo, and Rebecca Morrill of Waverly.