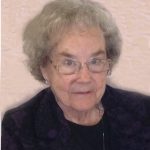 Madalyn Louise (Morgan) Bruns, 87, of Waverly and formerly of Denver, Iowa, passed away on Monday afternoon, March 27, 2017, at the University of Iowa Hospitals and Clinics in Iowa City from complications following surgery.
Madalyn was born on February 1, 1930, in Rockford, Illinois, the daughter of Roger and Genevieve (Sickles) Morgan. Madalyn was baptized on February 1, 1942 and confirmed on June 13, 1943 both at St. Paul United Church of Christ in Denver, Iowa. She attended grade school in Cedar Falls and Denver, graduating from Denver High School in 1947. On August 28, 1949, Madalyn was united in marriage to Virgil Bruns at St. Paul United Church of Christ in Denver. The couple made their home in the communities of Masonville, Denver, Eldora and Waverly. Madalyn worked various jobs, retiring in 1995 from the office of Dr. Roelfs, Treratola & Van Daalen.
Madalyn was a faithful member of St. Paul’s Lutheran Church in Waverly. In her spare time she enjoyed dances and playing cards, but what gave Madalyn the most joy was spending time with her family.  She also spent time volunteering with he Waverly Post 79 AMVETS Auxiliary.
She is survived by her husband, Virgil Bruns of the Meadows Assisted Living, Shell Rock, Iowa; her three children, Randy (Jana) Bruns of Ankeny, Iowa, Kristi (Cary) Griffith of Nashua, Iowa, Robert (Melissa) Bruns of Fayetteville, North Carolina; 10 grandchildren; 11 great grandchildren and one expected in June; her brother, Marvin (JoAnne) Morgan of Sarasota, Florida; several nieces, nephews, and a host of friends. Madalyn was preceded in death by her parents, Roger and Genevieve; 2 sisters, 1 brother, and an infant granddaughter, Christine.
Further details at Kaiser-Corson’s website