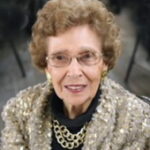 Marlys J. Mummelthei, 96, of Waverly, Iowa passed away on Thursday, September 2, 2021 at the Bartels Lutheran Retirement Community in Waverly.

Marlys Jean Mummelthei was born on March 25, 1925, the daughter of Louis and Clara (Meier) Platte in rural Tripoli, Iowa. She was baptized on April 12, 1925, at Maxfield Church and confirmed on April 2, 1939, at St. John Lutheran Church Crane Creek, rural Tripoli.  She attended rural schools in the Tripoli area. On September 19, 1943, she was united in marriage to Lorenz Mummelthei at St. Paul’s Lutheran Church in Waverly. Marlys was then employed at Harrisons and then began her career as a farmer’s wife and mother.

She was on the Evangelism committee at St. Paul’s, volunteered as a “Pink Lady” at the Waverly Hospital, Red Cross Blood drives, a cancer recovery support person, Ladies Amvet auxiliary and helped at the Veterans home in Marshalltown. She loved taking care of her grandchildren and great grandchildren.

Survivors are her son, Steven (Deb) Mummelthei of Waverly; four grandchildren and their children: Marc (Danielle) Mummelthei, and Madyson and Macy, Drew (Joy) Mummelthei and Andy, Ava, Ally and Acre, Stephanie (Clint) Whitcome and Weston, Kinley and Luke, Matt (Victoria) Mummelthei and Lenna. She was preceded in death by her parents; her husband, Lorenz on October 10, 2005; infant daughter, Connie and a brother, Lavern Platte.