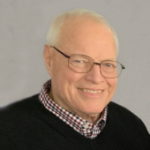 Bill was born on January 20, 1945, in Cedar Falls, the son of Howard and Bernice (Wiley) Ellinger. Bill was raised in Parkersburg and moved to Cedar Falls in 1961 where he graduated from high school in 1963. He then attended the State College of Iowa, Cedar Falls, where he later received his Bachelor of Arts Degree after serving four years in the United States Air Force.

Bill was united in marriage to Mary Sue Vaughn at First Methodist Church in Cedar Falls on June 10, 1966. They lived in Texas, Alabama, and Florida during Bill’s service as a medical laboratory technician in the US Air Force from 1966-1970. After returning to Cedar Falls in 1970, Bill continued his studies in Industrial Technology at the University of Northern Iowa.

In August of 1972, Bill and Mary Sue moved to Waverly where they bought their first home. The Bicentennial Year, 1976, was the start of their big adventure of building a new home on an acreage east of town, later dubbed “The Little House in the Big Woods.” Bill’s many skills were put to use in designing and building this “dream home,” a labor of love that continued forever!

The Little House in the Big Woods became the place for many gatherings of family and friends over the years. Bill loved celebrating holidays and entertaining friends—especially the bridge and poker groups as well as fishing meetings. Bill and Mary Sue also loved being a host family for many Wartburg international students over the years and still stay in touch with many of them.

John Deere (Waterloo Westfield) was Bill’s work home for thirty-nine years. He enjoyed his work as a toolmaker and, for a time in the 1980s, his work as an Employee Participation Coordinator. Lifelong friendships were made at John Deere and were treasured long after his official retirement in 2003.

After Bill retired from John Deere in 2003, he and Mary Sue moved to Hertford, England, UK, for five months while Mary Sue was a Fulbright Exchange teacher at Westgrove Primary School in London. Bill took advantage of this opportunity to live and travel in the UK and often told inquiring friends that he was doing serious “pub research.” Always one to look on the bright side of life, Bill shared his love of life with everyone he met.