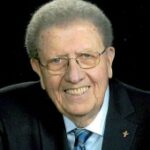 Al was born in a farm home one mile west of Austinville, IA on February 19, 1931, to Ole and Mary Huesman Janssen. He was baptized on May 13, 1931, in the Austinville Christian Reformed Church by Rev. Joling.

He attended Austinville Grade School and graduated from Aplington High School in 1948. After farming with his dad for a few years he enrolled at Iowa State College, now known as Iowa State University and graduated with a Bachelor of Science degree in Farm Operations and a minor in Ag Education in 1958.

He served 16 years in the Iowa National Guard attaining the rank of 1st Lieutenant. He was a member of the Waverly Amvet Post 79 and served as a member of the color guard. Al was also a member of the Waverly Exchange Club where he served as President for one term and was awarded the Golden Deed Award in 2002.  He served on the Waverly City Council, Bartels Board of Trustees, Waverly Electrical Board, and the Hospice Advisory Committee. As was a 4-H leader for 11 years and was honored at the Iowa State Fair as Iowan of the Day in 2010. He also served as a Hospice volunteer for 20 years. In retirement he taught Animal Nutrition for one year at Hawkeye College and published a book in 2000 entitled: The Team Behind the Barn and Other Memories.

Al was an active member of St. John Lutheran Church serving in many leadership capacities, sang in the choir for 45 years and taught Sunday School for 40 years. He had a passion for Evangelism.

Al spent his career in sales and marketing with Midland Cooperative, Supersweet Feeds, and 32 years with United Suppliers based in Eldora, Iowa.

He loved his Lord and Savior Jesus Christ and shared Him whenever there was an opportunity.

+ Nothing in my hand I bring but simply to Thy cross I cling.