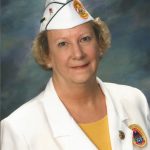 The Department of Iowa AMVETS Convention was held June 8, 9, 10 In Marshalltown. Brenda Taylor from Central City was elected President. I was elected 2nd Vice President, Child Welfare. My project this year will be the Lutheran Services in Iowa the Bremwood campus. Mary Steinbach was elected 3rd Vice President, Community Service. Mary’s project this year will be the Ronald McDonald House in Iowa City. Mary was also appointed Hospital Chairman. Amy Slaba was appointed recording secretary. Jan Lanske will continue as the Hospital Representative for the Veterans Home in Marshalltown.

At our June Auxiliary meeting we presented scholarships to –

Emily Archibald, Valparaiso University, Indiana; Biochemistry major; will be a freshman; had to work on our meeting night; from Waverly.

Maria Kuiper, second year scholarship, will be a sophomore at U of I, Journalism and Social Justice major, from Waverly.

I would like to Thank all the Auxiliary Ladies who gave their time and donated food for our monthly food nights. With all that you do we were able to give these scholarships.

The Auxiliary will be participating in the Heritage Days, July 21st. Meet at the sales barn at 10:00. Walkers should plan to wear Patriotic Shirts.

We Waited Together, Now Let’s Work Together