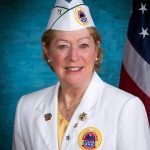 *As I look back through my calendar for the month of April, saw how filled it was from the beginning to the end and most were AMVETS Auxiliary related. We had a very successful meeting with some of the officers, finishing our 6 month’s reports. I wish to thank all the ladies who turned items in to be reported. I will then use those reports along with the first 6 month’s reports to apply for awards to be given at our State Convention June 9-11 in Marshalltown. On April 23 we had our SEC meeting (State Executive Committee) in Des Moines and Waverly #79 was mentioned with an outstanding job done with increasing new membership and also for the “Bring Back” members. I am very proud of our Auxiliary and the work we do for Veterans and their families, work within our community, and the time we spend volunteering at hospitals and nursing homes. Let’s continue to grow now a bigger and stronger AMVETS Auxiliary.

*The highlight of the month was meeting our National AMVETS Ladies Auxiliary President Evelyn McElvin from Orlando, Florida. She arrived in Des Moines Thursday April 20th.  Past National President- Kathy Berning from Cedar Falls, PDP and NEC Women-Nancy Carrier from Evansdale, PDP President and 3rd Vice Officer- Donna Fischer, and myself escorted Madam President on tours of the Iowa Veteran’s Cemetery in Van Meter, our State Capitol Building, The Ronald McDonald house in Des Moines where we delivered donated items, traveled to Marshalltown to the IVH where we attended a meeting and then helped at their Spring Carnival Day. Madam President assisted with a Nerf basketball booth sponsored by our VA Hostess, Jean Lanske, along with Sally O’Hare. Saturday night we attended the Recognition Dinner for State Commander, Mary Van Horn. Madam President spoke a little about herself, her travels, and about her National Project, John Tracy Clinics Preschool Program. As a fundraiser for her project we had a challenge for her. Since Iowa is very BIG on basketball, and since she had just helped with the basketball booth at IVH, Auxiliary members collected money from those attending and if she could make at least one basket out of 4, the money collected would go for her project. Well, the first was a miss, but she made 2 out of the remaining shots. We had collected $300. that night for John Tracy Clinics Preschool Program. Way to go Madam President Evelyn McElvin! Sunday Madam President attended our SEC meeting and then it was time for her to return home, to Orlando and prepare for her next visit to Missouri. She was very glad that the weather was nice, no snow, and was amazed at the flowering crabapple tree, tulips along some of the parkways, and how green and lush everything was here in Iowa.

* May brings us to the election of officers. This I will report more on next month, but most have agreed to another term. Along with the election of officers and their installation into office we will be presenting scholarships to high school seniors heading off to college next year. Because of your continued support to our monthly food nights we have enough profit to support our scholarship program, donate within the community, and make donations to State and National AMVETS Auxiliary projects. I cannot thank all of you enough for your dedication to AMVETS, AMVETS Auxiliary, and the Sons of AMVETS programs.

We Waited Together, Now Let’s Work Together