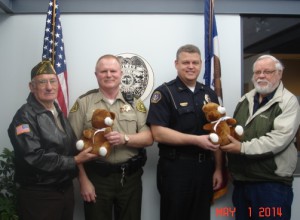 AMVETS Post 79 has been involved in the “Care Bear” program for several years.  This is a program supported by National and the Department, but is administered and financed by the local posts.

The concept is to furnish “teddy bears” to local emergency departments that they can carry in their vehicles and when called to an emergency where young children are involved, they can give this “Care Bear” to a child under stress.  We realize that responding personnel must first do their job, whether it is traffic control, 1st Aid, calling for support or whatever is needed to keep the area safe, and that the “Care Bear” may come later after things are under control.  At that point, if children are involved, the comfort of something soft to hold and hug can become a magical moment.  Most of us, at some point in our lives have had our own “teddy bear” or another stuffed toy that we have hugged and loved, possibly till the stuffing came out.  So I would ask for your support of this project, either financially or verbally by passing this on to others.

There are several AMVET posts in Iowa involved with this program, and comments we have received from a few of these emergency personnel has been very positive.  Fortunately, our local departments hand out very few, but this is not true for other areas, especially those located near communities like Des Moines or Cedar Rapids.