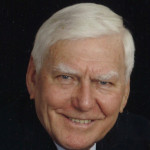 After a full and satisfying life, Arnold Franklin Waldstein (Arne), 89, of 1111 Bach Drive, Waverly, Iowa passed away on Saturday, February 8, 2014 in Hospice at the Bartels Lutheran Retirement Community in Waverly.

Arne Waldstein was born on a farm in Brooke Township, Buena Vista County, Iowa on January 17, 1925. He was the youngest of eight children born and raised by his Swedish immigrant parents Anna and Arthur Waldstein. He was baptized and confirmed at the Little Sioux Valley Lutheran Church and graduated from Lincoln Lee High School. Arne enlisted in the Army Air Corps where he served until honorably discharged in 1945. Following his military service, he enrolled at Buena Vista College in Storm Lake, Iowa and then subsequently transferred to Iowa State College in Ames where he graduated in 1949 with a Bachelor of Science in Farm Operation.

In 1951 Arne married the love of his life, Marianne Elizabeth Aust, at United Methodist Church in Storm Lake, Iowa on June 17, 1951. His professional career took them to Albany, Georgia, where he was employed as a farm manager. In 1953 they returned to Buena Vista County where he farmed and worked for Stalcup Agricultural Services in Storm Lake where he later became President and CEO. Under his leadership the business grew significantly from a firm of two to seven professional farm managers and rural appraisers. Arne received many awards and recognitions, including the D. Howard Doan award and the National Farm Manager of the Year by the American Society of Farm Managers and Rural Appraisers. He served as an agricultural consultant for the U.S. Government to improve farming conditions in Turkey and Czechoslovakia. In 1978 he was elected as a member of the Iowa State Senate where he served until 1986 before retiring to return full time to his business.

After retiring in 1999, Arne and Marianne moved to Waverly, Iowa to be closer to family but continued to enjoy many international travel opportunities. Beyond his professional career, he was a strong proponent of community and civic responsibility which he practiced throughout his life. Arne served on multiple boards, commissions and other venues at the local state and national level. In Waverly, he was involved in Kiwanis, the American Legion, Community Builders, St. Paul’s Lutheran Church, and was instrumental in helping to mobilize the various military service organizations to form the Waverly Area Veterans Post. He and Marianne are members of the Wartburg College Roundtable. Arne was also an author, writing many articles for local and statewide publications. His personal memoir about growing up in Iowa, “Water Runs Down Hill,” sold more than 3, 000 copies and received wide acclaim.

Above all, Arne Waldstein was a family man. All of his life’s work, whether professional or personal, was devoted to enhancing the quality of family life in the communities of which he was a part. Among Arne’s most precious qualities was a wonderful sense of humor. He loved to kid and joke at family gatherings. He was a role model of the first order and the accomplishments of his children and grandchildren owe no small measure to his mentorship. Arne is survived by his loving wife and life partner of 62 years, Marianne Nee (Aust); four children: Fredric (Edith) of Waverly, Arne Paul (Marie) of Housatonic, MA, Elizabeth Waldstein-Hart (Doug) of Hyde Park, NY, and Mark of Des Plaines, IL; seven adoring grandchildren: Lauren, Eric, Emma, Dontina, Annaliese, Nickolas, Lindsay and one great grandchild, Mia. Arne will be dearly missed by his family, including numerous nieces and nephews, and his many friends and colleagues.

He was preceded in death by his parents, Arthur and Anna Waldstein, four older brothers, and three older sisters.