From the Commander:  I picked this for October’s military history as my father came to Europe and Germany towards the end of the war and talked of the towns and area where this battle took place.  He could speak and understand some German, so he was utilized to help communicate with the thousands of German prisoners at the end of the war. 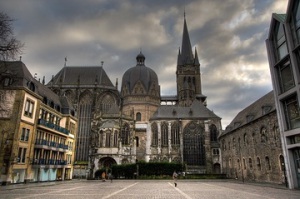 Aachen Cathedral or Kaiserdom, built by Charlemagne in 805 AD.

The Battle of Aachen was a major conflict of World War II, fought by American and German forces in and around Aachen, Germany, between 2–21 October 1944. The city had been incorporated into the Siegfried Line, the main defensive network on Germany’s western border; the Allies had hoped to capture it quickly and advance into the industrialized Ruhr Basin. Although most of Aachen’s civilian population was evacuated before the battle began, much of the city was destroyed and both sides suffered heavy losses. Aachen was the first German city to be captured by the Allies in the form of the 1st, 9th, 29th, and 30th Infantry Divisions, the 2nd and 3rd Armored Divisions, with elements of the 28th Infantry Division as reinforcements. The German commander there had planned to surrender the city as American troops neared and encircled it, but when this was discovered Hitler had him arrested and his unit replaced by three full divisions of the Waffen-SS, the most elite fighters Germany had to offer. The superiority of American artillery, as evidenced by the pockmarked remains of the city, was what allowed for American victory, though at a heavy price of 2,000 Americans lost and 3,000 more wounded. German forces surrendered on 21 October 1944 resulting in 5,000 new German prisoners of war.  The battle ended with a German surrender, but their tenacious defense significantly disrupted Allied plans for the advance into Germany. 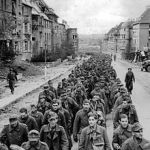 The ancient, picturesque city of Aachen had little military value in itself, as it was not a major center of war production. Its population of around 165,000 had not been subject to heavy bombing by the Allies. It was, however, an important symbol to both the Nazi regime and the German people; not only was it the first German city threatened by an enemy during World War II, it was also the historic capital of Charlemagne, founder of the “First Reich”. As such, it was of immense psychological value. The mindset of the city’s defenders was further altered by the different attitude the local population had toward them as they fought on home soil for the first time; one German officer commented, “Suddenly we were no longer the Nazis, we were German soldiers.”

For more information, see the full article at Wikipedia.org: The Battle of Aachen