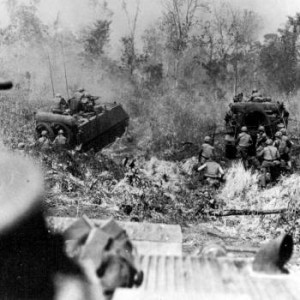 The Battle of Ap Gu occurred during 31 March and 1 April 1967 during Operation Junction City, a search and destroy mission by American military forces in Tay Ninh Province of South Vietnam, to the west of the capital Saigon. The battle near the border with Cambodia left 609 Viet Cong killed, 5 captured, and over 50 weapons of all types captured, while the Americans lost 17 killed and 102 wounded.
Two American infantry battalions were scheduled to make an airborne assault into an area near the border with Cambodia to secure some roads and US bases, and to search and destroy communists in the surrounding area. The assault was scheduled for 30 March, but poor weather meant that one of the battalions did not land until the day after. In the early afternoon of 31 March, the Americans began reconnaissance missions, and one platoon was put into difficulty by a communist attack that killed their commanding officer. A few hours later, an American company was attacked by a battalion-sized communist force, and were in difficulty until supporting artillery allowed them to withdraw. The communists tried to exploit their advantage but were driven off by American firepower.
Before dawn the next day, the communists launched their main attacks on an American landing zone and fire support base with mortar-fire and infantry charged. They managed to overrun a few bunkers and capture 0.4 ha of territory before the Americans called in air strikes and cluster bombs. This wore down the communists and they forced the Viet Cong to withdraw by early morning with heavy casualties.
For more information, read the full article at Wikipedia.org.