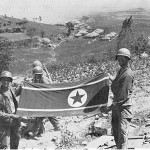 The Battle of Nam River was an engagement between United Nations (UN) and North Korean (NK) forces early in the Korean War from August 31 to September 19, 1950 in the vicinity of the Nam River and the Naktong River in South Korea. It was a part of the Battle of Pusan Perimeter, and was one of several large engagements fought simultaneously. The battle ended in a victory for the United Nations after large numbers of United States (US) and Republic of Korea (ROK) troops were able to repel a North Korean attack across the river.

Positioned in defense of Masan during the Battle of Masan, the US 35th Infantry Regiment, 25th Infantry Division took up positions along the Nam River, one of the many tributaries of the Naktong River on the southern flank of the Pusan Perimeter. The North Korean People’s Army’s 7th Division effected a crossing of the river on August 31, and though the 35th Infantry was able to stem the North Korean advance, thousands of North Korean troops were able to exploit a hole in the line and surround the regiment. What followed was an intense battle in which the US and North Korean units were heavily engaged all along and behind the Kum River line. Eventually, though, the North Korean force was routed and defeated by the US troops.

During the battle, the 35th Infantry was instrumental in forcing back the North Korean division and preventing it from advancing to capture Pusan. The delay was enough for UN forces to counterattack Inchon, effectively defeating the entire North Korean army at the Pusan Perimeter. The 35th Infantry’s performance in the battle earned the regiment a Presidential Unit Citation.