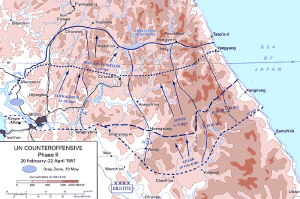 The Battle of Kapyong (22–25 April 1951), also known as the Battle of Jiaping, was fought during the Korean War between United Nations (UN) forces—primarily Australian and Canadian—and the Chinese communist People’s Volunteer Army. The fighting occurred during the Chinese Spring Offensive and saw the 27th British Commonwealth Brigade establish blocking positions in the Kapyong Valley, on a key route south to the capital, Seoul. The two forward battalions—3rd Battalion, Royal Australian Regiment (3 RAR) and 2nd Battalion, Princess Patricia’s Canadian Light Infantry (2 PPCLI)—occupied positions astride the valley and hastily developed defences. As thousands of South Korean soldiers began to withdraw through the 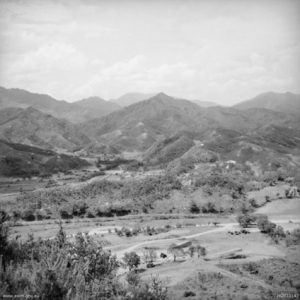 valley, the Chinese infiltrated the brigade position under the cover of darkness, and assaulted the Australians on Hill 504 during the evening and into the following day.
Although heavily outnumbered, the 27th Brigade held their positions into the afternoon before the Australians were finally withdrawn to positions in the rear of the brigade, with both sides having suffered heavy casualties. The Chinese then turned their attention to the Canadians on Hill 677, but during a fierce night battle they were unable to dislodge them. The fighting helped blunt the Chinese offensive and the actions of the Australians and Canadians at Kapyong were important in assisting to prevent a breakthrough on the United Nations Command central front, and ultimately the capture of Seoul. The two battalions bore the brunt of the assault and stopped an entire Chinese division during the hard fought defensive battle. The next day the Chinese withdrew back up the valley, in order to regroup. Today, the battle is regarded as one of the most famous actions fought by the Australian and Canadian armies in Korea.
Want to know more?  Read about it at Wikipedia.org