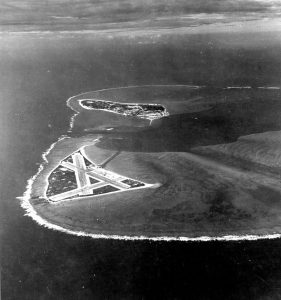 Midway Atoll, several months before the battle. Eastern Island (with the airfield) is in the foreground, and the larger Sand Island is in the background to the west.

The Battle of Midway was a decisive naval battle in the Pacific Theater of World War II. Between 4 and 7 June 1942, only six months after Japan’s attack on Pearl Harbor and one month after the Battle of the Coral Sea, the United States Navy under Admirals Chester Nimitz, Frank Jack Fletcher, and Raymond A.  Spruance decisively defeated an attacking fleet of the Imperial Japanese Navy under Admirals Isoroku Yamamoto, Chuichi Nagumo, and Nobutake Kondo near Midway Atoll, inflicting devastating damage on the Japanese fleet that proved irreparable. Military historian John Keegan called it “the most stunning and decisive blow in the history of naval warfare.”[10]

The operation, like the earlier attack on Pearl Harbor, sought to eliminate the United States as a strategic power in the Pacific, thereby giving Japan a free hand in establishing its Greater East Asia Co-Prosperity Sphere. The Japanese hoped another demoralizing defeat would force the U.S. to capitulate in the Pacific War and thus ensure Japanese dominance in the Pacific. Luring the American aircraft carriers into a trap and occupying Midway was part of an overall “barrier” strategy to extend Japan’s defensive perimeter, in response to the Doolittle air raid on Tokyo. This operation was also considered preparatory for further attacks against Fiji, Samoa, and Hawaii itself. 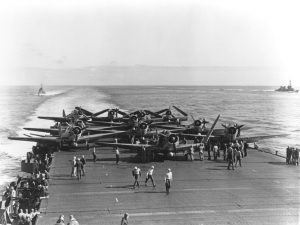 The plan was handicapped by faulty Japanese assumptions of the American reaction and poor initial dispositions. Most significantly, American codebreakers were able to determine the date and location of the planned attack, enabling the forewarned U.S. Navy to prepare its own ambush. All four of Japan’s large aircraft carriers—Akagi, Kaga, Soryu and Hiryu, part of the six-carrier force that had attacked Pearl Harbor six months earlier—and a heavy cruiser were sunk, while the U.S. lost only the carrier Yorktown and a destroyer. After Midway and the exhausting attrition of the Solomon Islands campaign, Japan’s capacity to replace its losses in materiel (particularly aircraft carriers) and men (especially well-trained pilots and maintenance crewmen) rapidly became insufficient to cope with mounting casualties, while the United States’ massive industrial and training capabilities made losses far easier to replace. The Battle of Midway is considered a turning point in the Pacific War.