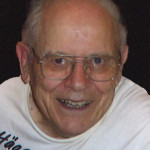 Chuck was born July 22, 1920, in Lena, Illinois, son of Peter and Mary (Migliore) Bonavia.  He loved to tell the story of how he started out with two pennies his father gave him.  He peddled newspapers, worked for the local dentist as an office assistant, and started his life-long career for the Illinois Central Railroad during one of the hottest summers as a section laborer.

Chuck graduated from Lena High School in 1939, attended Telegraph and Business School in Valparaiso, Indiana, working his way through by washing dishes.  During the war his unit was sent overseas while he was sent on for further training in communications using the Continental Code and as a radio operator.  Chuck was proud to be a World War II Veteran.

Chuck met and married Rossalie Trunnelle, a co-worker for the Illinois Central in 1947.  They had daughter Charlotte Rose while living in Waverly.  They later separated.  He married Jean Betts in 1965 and welcomed Barbara and Donald Betts into his home.  After retiring from Illinois Central Gulf as a customer service agent in 1981, Chuck and Jean traveled from coast to coast, gardened, played cards, and enjoyed spending time with family.  In later years his coffee friends became like family in whose company he greatly enjoyed.