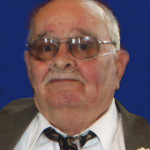 Donald Earl Miller, 75, of Waverly, Iowa, died on February 26, 2014, at his home in Waverly from complications of lung cancer. Don was born on August 11, 1938, in Hampton, Iowa, the son of Earl and Eula (DeArmon) Miller.  He was raised in Dumont and graduated from the Dumont High School in 1957.  Don then entered the United States Army on October 1, 1957 and was honorably discharged on January 22, 1958.  He then went to work for the Oliver Tractor Works in Charles City.   On November 16, 1958, Don was united in marriage to Dorene Ball at St. John’s Lutheran Church in Waverly.  The couple made their home in Waverly and later that year Don started working for Carnation/Nestle’ retiring in 1998.

Don was a past member of the Waverly AMVETS and a current member of Waverly Joe Cretzmeyer V.F.W. Post #2208.  His main enjoyment and passion was taking care of his immaculate yard, however, what he treasured most was spending time with his wife, children, and grandchildren.