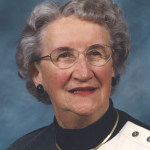 Liz was born on December 2, 1926 in Salco, Pennsylvania, the daughter of Andrew and Mary (Rokonal) Gomola. She was baptized on January 2, 1927 at the Roman Catholic Church in Berlin, Pennsylvania. Liz attended school at Berlin Brothers Valley High School in Berlin, graduating in 1944. On August 13, 1949, she was united in marriage to Lee P. McKenzie Jr. at St. Mary’s Catholic Church in Waverly by Fr. Mohoney. Liz was a homemaker and once the children were old enough, she and Mildred Keller cleaned houses for many Waverly residents over the years. Lee died on May 27, 1999, and Liz continued to live in her home until May 29, 2013, when she made her residence at the Meadows Assisted Living in Shell Rock until July 1st when she became a resident of Shell Rock Healthcare.

Liz was a faithful member of St. Mary Catholic Church in Waverly and her faith in the Lord carried her through all circumstances. She was also an active member of the AMVETS Ladies Auxiliary. She always looked forward to their visits to the Veteran Home in Marshalltown. Over the years she devoted much of her time and talents to those in need and service to others. What gave her the most joy was spending time with her family and friends.