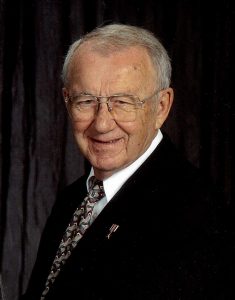 Gene was born on July 13, 1926, in Dows, Iowa, the son of Lewis and Erdene (Starr) Gaulke. Gene graduated in 1944 from the Clarion High School and then attended 3 years at Iowa State Teachers College (now U.N.I.) in Cedar Falls, Iowa. On September 26, 1944, Gene was drafted into the U.S. Army at Ft. Snelling, Minnesota, during WWII. He was assigned to the 10th Armored Division which was headed for the Battle of the Bulge in Bastogne, Europe. Gene was honorably discharged on July 1, 1946, with the rank of Sgt. Gene was awarded the American Theater Ribbon, Eamet Ribbon, Good Conduct Medal, Victory Ribbon and the Bronze Star. On June 5, 1949, Gene was united in marriage to Betty A. Bowman in the Methodist Church in Clarion, Iowa. The couple made their home in Clarion, and in 1956 they moved to Janesville, Iowa, for several months before moving to Waverly. Gene worked from 1956-1961, with Hampton Iowa Farmers Hybrids. Gene then worked as a salesman for U.S. Steel, Agri-Chemicals based out of Pittsburgh, Pennsylvania. Gene retired in 1987, and the couple continued to make their home in Waverly. Betty died on January 9, 1990. In 1993, Gene was united in marriage to Dolores G. Voorhees, making their home in Cedar Falls. The couple later divorced. For the past 6 years, Gene has been living in Deland, Florida, to be closer to his daughter/son-in-law, Kathy & Larry and grandchildren.