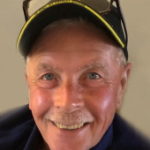 Bix was born December 12, 1948, in Independence, Iowa the son of Leonard and Marjorie (McCray) Bixler. He was raised by Marjorie and Lyle Harris. He graduated from Fort Dodge High School and then entered the United States Army, where he served until his honorable discharge. Upon his return he traveled the country for nearly a year before landing in Waverly. On June 19, 1982, he was united in marriage to Kim Coonradt at St. Paul’s Lutheran Church in Waverly. He partnered alongside Bob Cousin at Cousin Custom Builders from June 4, 1990 until his retirement on December 5, 2012. After retirement he worked for several area businesses.

Bix enjoyed the simple things in life; family, a strong group of friends, golf, and cocktail hour, usually in that order but he was known to switch it up from time to time. The 30 years of fishing and vacationing with the family to Hayward, Wisconsin was always a highlight for Bix. His kids and grandkids meant the world to him, he was the greatest “Papa”. In his free time he enjoyed reading and staying active.

Bix is survived by his wife, Kim of Waverly, two daughters; Katie (Aaron) Creger of Urbandale and Betsy (Matt) Davis of Waverly, one son; Joe (Carrie) Bixler of Charlotte, North Carolina, six grandchildren and one on the way; Elly, Colton, and Crew Creger, Guy and Sloane Davis and Leona and Baby Boy Bixler due in December, and one brother; Scott (Jan) Bixler of Missoula, Montana. He is preceded in death by his parents and a brother, Dale Bixler.