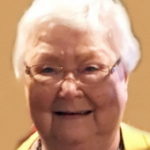 Helen Louise Burman, 87, of Waverly, Iowa passed away on Monday, April 6, 2020 at her residence in Waverly.

Helen Louise (Seele) Burman was born in Waterville, Iowa, on August 6, 1932, the daughter of Helen (Hermanson) and Oscar Seele. She was baptized and confirmed in the Waterville Lutheran Church, where she was a member of the Choir and Luther League.

Graduating in 1950 from W.H.S., Helen moved to Waterloo, and in January 1952, became employed by Northwestern Bell Telephone Company, a job she held until retiring in 1992. Helen loved her job -one she wanted as a young girl- during the summers and after school she helped at the local telephone office in Waterville.

October 22nd, 1954, Helen and John Clark Burman married, and they had four children; John, Mark, Ann and Sue. Mark died July 27, 1983 as a result of a motorcycle accident. Her husband John died September 29, 2000 the result of a car accident.

Helen was a member of the Telephone Pioneers, Secret Pals group and Beta Sigma Phi. She took pride in caring for her home, was a great cook and shared with her family and friends. She also enjoyed crocheting. Above all, she enjoyed the time spent with her family, especially her grandchildren.