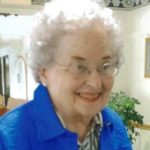 Jackie was born on September 26th, 1926, in Dysart, Iowa, the daughter of Donald Abraham and Lenora Ann (Schnell) Holley. As a child, the family moved to Waverly and Jackie graduated from Waverly High School in 1944. On October 21st, 1945, Jackie was united in marriage to her seventh-grade sweetheart, Romaine Walter “Jim” Strotman at The First Methodist Church in Waverly. In 1969, Jim and Jackie purchased the Bergen Lumber Company and changed the name to Strotman Building Center. Jim and Jackie were very proud of their owned and operated family business for more than 50 years. After over 66 years of marriage, Jackie lost her beloved husband in February of 2012.

Jackie was a faithful member of Trinity United Methodist Church for more than 80 years. She was also a member of the Waverly Chamber of Commerce, Waverly Amvets Auxiliary and her bridge club. In her earlier years, Jackie liked to camp. She also loved her many dogs, feeding barn cats, baking and shoes. Jackie proudly grew tuberoses and shared them with family and friends. Sharing time with family and close friends was very important to Jackie.