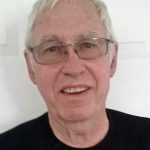 James Lee Wright, 75, of Waverly, Iowa passed away on Monday, February 5, 2018, at the Hospice of the Valley – Lund Home in Gilbert, Arizona after a brief illness.
Jim was born on February 25, 1942, the son of Clare “Charlie” and Gertie (Evers) Wright in Waverly, Iowa. He graduated from Waverly High School in 1960. On October 9, 1965, he was united in marriage to Charlotte Elaine Maas at St. John Lutheran Church in Waverly. Jim helped his father doing block and brick work and in 1967, built his family home east of Waverly, where the couple continued to live. Jim was employed at Carnation (Nestle), retiring after 39 years of service on February 1, 2002. After retirement he and Elaine split their time between Iowa and Arizona.
Jim enjoyed baseball and drag racing, often planning family vacations to attend a game or race. He loved playing cards with friends, traveling, and spending time with his grandchildren. In his younger years, he enjoyed racing at Neita Raceway and in later years, he took up woodworking making countless pieces of furniture for friends and family. He was a member of St. John Lutheran Church in Waverly, Teamsters Union, Cedar Valley Woodworkers Club, and Sons of AMVET.
Survivors include his wife of 52 years, Elaine of Waverly, Iowa; mother, Gertie Wright of Waverly, Iowa; daughter, Becky (Tom) Adix of Denver, Colorado; son, Jeff (Kathleen) Wright of Kansas City, Missouri; four grandchildren, Alexa and Sam Adix and Sinjin and Waylon Wright; sister, Kay (Dennis) Brown of Sumner, Iowa and several nieces and nephews. He was preceded in death by his father, Charlie Wright.