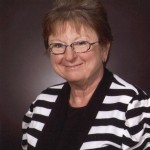 Jo was born on March 17, 1948, in Chicago, Illinois, the daughter of John T. and Helen (Trainer) Daly. She graduated from Mother McCauley High School in Chicago in 1966. She was united in marriage to John Raap on April 6, 1974 in Chicago, Illinois. After they moved to Waverly, she worked for First National Bank in Waverly, and later worked part-time. Jo began with the City of Waverly in 2003 as the assistant City Clerk, later becoming City Clerk. Jo retired on July 3, 2014.

She was a member of AmVets Auxiliary of Waverly and served as a volunteer with Cedar Valley Hospice in Waverly.

Jo is survived by her husband, John Raap of Waverly, Iowa; a daughter, Renee Raap of Grimes, Iowa; a son, Scott (Lauren) Raap of North Liberty, Iowa; a grand-daughter, Lydia Raap and a brother, Ray (Pat) Daly of Henderson, Nevada. She was preceded in death by her parents, and a sister, Maureen Penman.