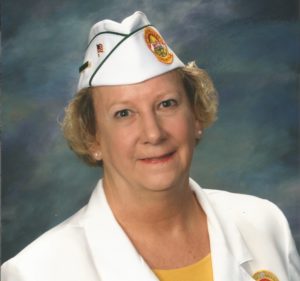 ONE OF A KIND

She advocated for them, supported them, and met with senators and legislators to ensure that veterans’ rights and benefits are honored.

Donna Fischer, the AMVETS Ladies Auxiliary President for Waverly’s Post 79, will be greatly missed.  “We were truly honored and privileged to have those last times with her,”

A 1966 graduate of Waverly-Shell Rock High School, she started working at Lutheran Mutual in November of 1966 and retired from CUNA Mutual in June of 2017.

As president of the organization, Donna was especially proud of the work the group’s 132 current members.

Donna held, for many years, the office of National Executive Committee woman, and in that role she would lobby various senators and congressmen to protect veterans’ rights and benefits.

Donna was at the helm of the Ladies Auxiliary during the historic flood of 2008, which destroyed the AMVETS building in Waverly. Eventually, after years of community fundraising and joining forces with the other veteran organizations, the AMVETS found its new home at the state-of-the-art Waverly Area Veterans Post.

“From the very beginning, when she became involved in 1996, she was passionate about veterans ”

“She was a big part of all of us and she will be greatly missed,”