*For those that would like an update, the old VFW building is totally gone.  Shortly, Baker Construction will be digging, setting footings and pouring concrete.  Soil borings were done and results were better than what was anticipated.  Surveying and pin placement is in progress and some changes were requested of the architect that will save some costs in the long run.  So after a lot of waiting, hundreds of comments, construction will be starting shortly.

*Please check the information following regarding a WWII Boeing B-17 Bomber returning to Waterloo as part of a nationwide tour.    This will take place the week end of June 12-14th.  This is one AWESOME plane and everyone and their children and grandchildren should visit this piece of living history. 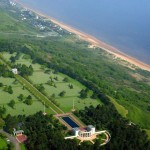 *A huge Thank You to everyone that helped in any way with all the Memorial Day activities.  I truly could not believe the number of people that showed up to assist.  I was also pleased by the number of young people that were there to help.  Richard Miller gave one of the young men helping with our “Flanders Field” a brief history lesson regarding this historic place.  This makes me wonder what history is being taught, that the men and women that died to keep this country free and the places they are buried are unknown to our younger generation.  Do the following names mean anything to you: Aisne-Marne, France,  – Brittany , France,  – Lorraine, France,  – Sicily, Italy,  – Manila American Cemetery  and Memorial, Philippines, – and North Africa American Cemetery, Tunisia?  Did you know that the Manila American Cemetery contains the remains of over 17,000 Americans?

Aluminum Overcast a B-17 Bomber

Members of the John Livingston Chapter 227 of the Experimental Aircraft Association (EAA) are continuing to plan activities for the historic plane’s arrival.

“This planning effort is a combination of volunteer efforts by fellow member of Chapter 227, along with staff from both Livingston Aviation and the Waterloo Airport,” said Warren Brecheisen, President of the local EAA chapter.

A press release issued through the City of Waterloo, describes the plane as “a living history of American Heritage and a tribute to all of the men and women who have served to defend our Country.”

According to event organizers, the B-17 bomber coming to Waterloo is a real World War II aircraft and not a replica.

“This is the same aircraft that landed at Waterloo for a brief one-day stop last year when it was well received by the public,” Brecheisen said. “As an EAA Chapter, we were pleased when the EAA Headquarters Office reached out to us to inquire whether our local EAA Chapter would like to showcase the aircraft for a few days – well, how could we turn it down?”

Planning for the arrival of Aluminum Overcast has been on-going since early 2015.

While the plane is stationed in the Cedar Valley, the general public will get a rare chance to experience one of the few remaining B-17′s still in existence. The historic aircraft will be making only 13 stops on its 2015 nationwide tour with Waterloo being the only stop in Iowa.

Starting Friday, June 12, and continuing over the weekend, ground tours will be available to the public for $10 per individual and $20 per family. Children under eight-years-old will be admitted free, along with all active military persons and veterans. A souvenir trailer will be on-site for those that want to memorialize the event

For those seeking a true adventure, rides will be for sale as well. Flights can be booked in advance at www.b17.org or at the door.

The plane’s scheduled visit to the Cedar Valley coincides with the annual “My Waterloo Days” festival, which runs June 11-14. EAA Chapter 227 officials are encouraging area residents to view the aircraft, experience the sights and sounds, and take a look at aviation history.