Why the change from “Social Member”?

First please read the following from the Internal Revenue Code 170(c)(3) regarding Veterans Organizations operating under the 501 (c)(19), which is the VFW, AMVETS, Legion, MCL and WAVP at present.

There is more to this, but simply put; for our Veteran Organizations to maintain their status of an income tax deduction for contributions to a post of “war veterans”, no social members are allowed.

Question:  Why the sudden worry or change now?  Ans – 1. Our National Offices have let it be known, that we will abide by the IRS rules.  2.  After 9-11 and the patriotic fever that hit the US, many new “veterans groups” started or attempted to start using the 501 (c)(19) and were not even close to meeting the requirements.  This brought the attention of the IRS and now they are monitoring all Veterans Groups closer than ever before.

Question:  What’s the answer?  Ans – What is being proposed for this year; is that you will be an Annual Patriot Supporter for 2016 with a donation of $35.00.  Since it is a donation, it is tax deductable and you will receive a card noting that you are a supporter.

Question:  What does that get me?  Ans – Since our liquor license is for an open bar or club, you will be allowed the same privileges as before, except you cannot have a voice or vote regarding Veteran activities.

That being said; know that many of us want your input and comments.  Some of our best supporters and contributors have been non-veterans and that is greatly appreciated and is not taken for granted.  We are trying our best to meet the IRS requirements and also maintain a way to show our gratitude.  There easily could be some changes in the future, but some sort of action was needed now.

As an Annual Patriot Supporter of the WAVP, you will be asked for one (1) $35.00 donation for 2016.  This annual donation allows you to attend the membership dinners if invited, the open activities listed on the calendar, our Canteen and no further charges except those posted for Thursday meals, steaks or activities that are also charged to VSO members.

You will not be listed under any Veterans Service Organization, e.g.  AMVETS, but will be under the WAVP.  Again, the previous “social” members have been an important component of our organizations; this is simply a legal way for them to continue their support.  Thanks!

As of Friday, October 16, 2015, the plumbing, electrical, and any other utilities have been installed on the lower level.  Baker is now back on site, backfilling and making preparations for adding rock and bringing everything to grade.  When setup is complete, the lower level concrete will be poured.  Peter’s Construction was on site and framing steel work is being delivered.  All I can say is; “Things are moving forward”. 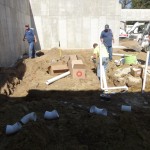 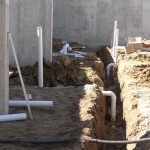 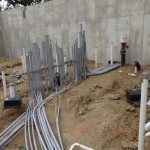