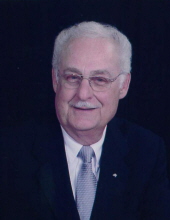 Larry was born June 5, 1938, in Butler County, Iowa, the son of Alfred and Minnie (Laube) Schmidt.  Larry was baptized in June of 1938 in Clarksville, Iowa and on March 18, 1951, he was confirmed at Peace United Church of Christ in Waverly.  He graduated from Waverly High School in 1957.  Larry served active duty in the United States Army from 1960-1962 then transferred to the National Guard and continued to serve until 1967.  On May 2, 1965, Larry was united in marriage to Joyce Brase at St. Paul’s Lutheran Church in Waverly.  During his life Larry worked for Fred’s Super Value, Shield Bantam, Oliver Corporation all in Iowa. While working for Bantam/Koehring as District Manager he and his family were transferred to Golden Colorado.  In 1979, he and his family moved back to Waverly, Iowa, where he was general foreman at Koehring.  In 1980, his career took him to GMT as a tool designer and then a year later he became a Production Manager at RADA Manufacturing where he then retired on June 1, 2000.

Larry was a member of St. Paul’s Lutheran Church in Waverly where he was on the counting committee for 20+ years. Larry was a devoted fifty plus year member of Tyrell Masonic Lodge in Waverly where he held numerous offices included a two time past master and chaplain .  He was very passionate about his involvement with El Kahir Shrine in Cedar Rapids where he was active in the cycle patrol unit and then the Mobile Nobles with also being a past director the Jesters, all within Shrine.  Larry enjoyed spending time fishing over the years with his daughter’s and then passing on that tradition to his granddaughters.  He also found a passion with woodworking and loved to golf with his brother, Smitty. Larry was created as a man of his word.  He had a strong love for his family and enjoyed watching his granddaughters in all of their activities.  He was respected by all those that knew him and he was always there to help a friend or someone in need.  Everyone seems to have a story about Larry or a kind word to share… he was loved by so many.