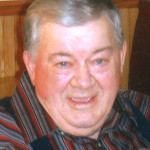 Buzz was born July 21, 1938, in rural Plainfield. He attended Jackson Country School in Plainfield through third grade and Six Mile Grove Country School through the 8th grade. He later went on to earn his G.E.D. On June 11, 1961, he was united in marriage to Sandra K. (Walther) at St. Paul’s Lutheran Church in Waverly. On November 3, 1961, he entered the United States Army and served until his honorable discharge on October 28, 1963. Buzz worked as a part-time milk hauler for Carnation Co. and Bremer Creamery. He dairy farmed, crop farmed, and did custom work and silo filled for area farmers. He also worked part time at the Waverly Sale Barn up until an automobile accident forced him to stop in 1979. Even though the accident left him unable to farm again, he enjoyed nearly 10 years of work at United Equipment in Waverly.

Buzz enjoyed square dancing in his younger years and was a fan of many different kinds of music. He liked being outdoors and attending chuck wagon races. Family gatherings were special and important times in his life.