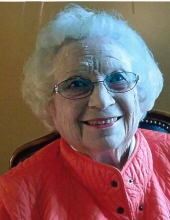 Marcia Yaggy Meyer, 100, of Waverly, Iowa, passed away May 22, 2021 at the Bartels Lutheran Retirement Community.

Marcia was born on October 28, 1920, in Blairstown, Iowa to the Reverend Oliver and Mrs. Edna Yaggy. She was the youngest of three children. Her siblings were Miriam Yaggy Renz (Heine) and Mark Yaggy (Gweneth). Most of her youth was spent at their family home in Cedar Falls, Iowa, where her father ministered at the Evangelical United Brethren Church near downtown Cedar Falls.

Marcia attended Cedar Falls High School and enjoyed learning how to play the violin as well as becoming a member of the Red Peppers Cheerleading Squad. She also spent time during each summer at the Bible Conference grounds with her family as well as developing an interest in anything related to Home Economics—cooking, sewing, decorating and more.

It was during high school that Marcia somehow met John Meyer. He has told stories about how he and some of his friends would drive to Cedar Falls on Wednesday nights, which was church night, and she would sneak out of a window in the church basement to join them as they drove around town. She made the most out of Wednesday night church!

After graduation, Marcia attended Iowa State Teacher’s College (University of Northern Iowa) to major in Home Economics for two years. World War II interrupted her schooling as she and a girlfriend took off to get a job with McDonnell-Douglas aircraft in California. She wasn’t exactly ‘Rosie the Riveter’, but she did obtain a position in the plant office as a secretary. Eventually, she was called home to help out with a family health situation.

Marcia married John Meyer while he was on leave during the War. Joel, their first born child, was born on August 6, 1945, the day the atomic bomb was dropped on Hiroshima. When John returned to Waverly after the war, they settled in a home just north of the Waverly bowling alley. Later, they lived at 323 2nd Street SW and then were ‘pioneers’ as they built a home on the edge of town in the Ridgewood subdivision in 1959/1960.

Waverly was the only place to live, according to John and Marcia. John was very involved in the historical preservation of Waverly as well as the parks. He was very proud of his involvement in WWII and returned to Waverly after the war ended to help his Dad with Meyer Pharmacy.

Marcia enjoyed being involved in Waverly and made some very good friends. She enjoyed playing bridge, playing her violin in Waverly-Wartburg Community Symphony, was a member of the Daughters of the American Revolution, helped organize P. E. O. Chapter ML and took care of four children while John ran the drugstore.

Marcia’s faith in God was a constant in her life. She never missed a Daily Devotion—her favorite sources were Guideposts and the Daily Word. Prayer and a short meditation have continued to be a part of her morning ritual. Perhaps that has been why she has always had such a positive outlook about her life and events that have occurred over the years.

Among Marcia’s many talents was the creative touch she put on almost everything that she did. She loved to decorate her home not only with her interior design skills, but she also made every holiday special. Fall is probably her favorite season but Valentine’s Day, Easter, the summer patriotic holidays, Halloween and Christmas always brought forth different decorative touches.

Her family loved it! Her delicious and carefully decorated cut out cookies were always enjoyed by her family and friends—gingerbread boys/girls at Christmas, cutout sugar cookies for Christmas and Valentine’s Day (hearts), bunnies and eggs for Easter, pumpkins for Halloween. They were always special and good to eat!

Marcia was a great seamstress and made many a dress for herself and clothing for her four children to wear to church or special occasions, especially Liz who now wishes she would have appreciated them more in her youth when she ‘had’ to wear them rather than wearing store bought clothes as did her friends. Little did she know at that time that her mother’s creations were very special.

In 1984, Marcia was diagnosed with breast cancer and had a mastectomy. She was a 37- year survivor and has remained cancer free ever since.

As Marcia resisted moving from her home and belongings after John passed away 15 years ago, the Meyer children definitely appreciated the friendship of Heidi Kramer over the past 15 years as she has helped Marcia in more ways than one. Heidi and her family have come to the rescue for us many times especially when it was not convenient for anyone ie. In the middle of night or on holidays. In August of 2015, the health event that we had anticipated occurred from which Marcia rebounded. After recovering from a blood clot/fall, she adjusted to life in the Bartel’s Community where she lived in Assisted Living at Linden Place and then to Woodland Terrace in recent years. Heidi has been there for Marcia and the family when it was difficult for us to get to Waverly. Heidi has been a true blessing to all of us, especially Marcia, because Waverly was her home and she wanted to live out her life there.

We also appreciate the care and attention that the fine staff at the Bartel’s Retirement Community have given to Marcia throughout the two years she lived at Linden Place and then the special care from those staff members at Woodland Terrace especially during the unusual year with Covid-19. In addition to the wonderful nursing staff, cleaning, kitchen, music/leisure activity staffs, they have developed some wonderful ways to work with communication for family members who are unable to visit residents often. We appreciate the extra time spent with Face Timing for each of us so that we could each have a day every week to visit our mother when we couldn’t visit her in person. Thank you so very much for all that you’ve done.

Marcia was preceded in death by her parents, Reverend Oliver and Mrs. Edna Yaggy, older sister, Miriam Renz, an older brother, Mark Yaggy and her husband, John Edward Meyer who passed in December of 2005 at the age of 86 and a niece, Maureen Renz Esch Brimager who passed in 2015 and a nephew, Malcolm Renz, who passed away in 2016. We, Marcia’s children, appreciate everyone who has remained in contact with her over the years—Mom and Dad’s close friends and neighbors, people who knew us as youngsters, their hunting friends who had fun hunting mushroom, pheasants, asparagus, their biking friends, her P. E. O. Sisters who have watched over her especially in the past few years, her good bridge playing friends, those special people from our parents’ favorite place to get a good steak dinner—the former Amvets/Waverly Veteran’s Post, the fine people from Meyer Pharmacy, the Wartburg connection—lunches, dinner, the Artist Series and all of the treasured customers of Meyer Pharmacy who came from all over Bremer County.