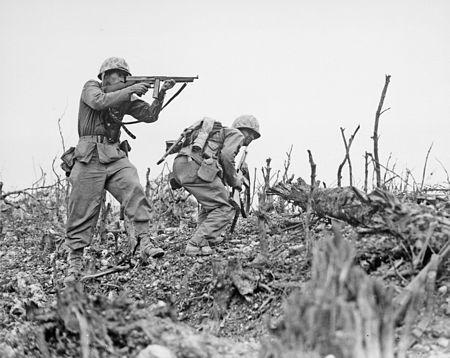 The battle has been referred to as the “typhoon of steel” in English, and tetsu no ame (“rain of steel”) or tetsu no bōfū (“violent wind of steel”) in Japanese. The nicknames refer to the ferocity of the fighting, the intensity of kamikaze attacks from the Japanese defenders, and to the sheer numbers of Allied ships and armored vehicles that assaulted the island. The battle resulted in the highest number of casualties in the Pacific Theater during World War II. Based on Okinawan government sources,[10] mainland Japan lost 77,166 soldiers, who were either killed or committed suicide, and the Allies suffered 14,009 deaths (with an estimated total of more than 65,000 casualties of all kinds). Simultaneously, 42,000-150,000 local civilians were killed or committed suicide, a significant proportion of the local population. The atomic bombings of Hiroshima and Nagasaki caused Japan to surrender less than two months after the end of the fighting on Okinawa.