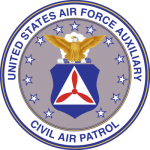 The Civil Air Patrol was conceived in the late 1930s by aviation advocate Gill Robb Wilson, who foresaw general aviation’s potential to supplement America’s military operations. With the help of New York Mayor Fiorello H. LaGuardia, in his capacity as then-Director of the Office of Civilian Defense, CAP was created with Administrative Order 9, signed by LaGuardia on 1 December 1941 and published 8 December 1941. The Civil Air Patrol had 90 days to prove themselves to Congress. Major General John F. Curry was appointed as the first national commander. Texas oilman David Harold Byrd was a co-founder of CAP.

During World War II, CAP was seen as a way to use America’s civilian aviation resources to aid the war effort instead of grounding them. The organization assumed many missions including anti-submarine patrol and warfare, border patrols, and courier services. During World War II CAP’s coastal patrol flew 24 million miles, found 173 enemy U-boats, attacked 57, hit 10 and sank two, dropping a total of 83 bombs and depth charges throughout the conflict. By the end of the war, 64 CAP members had lost their lives in the line of duty. 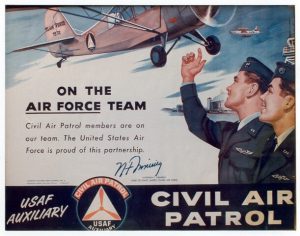 On the Team, Civil Air Patrol poster (1955) featuring an Air Force airman and a CAP cadet, with a CAP L-16 and an Air Force F-94 flying overhead. This poster features the signature of then-Chief of Staff of the United States Air Force, Gen. Nathan F. Twining.

After the end of World War II, CAP became the civilian auxiliary of the United States Air Force, and its incorporating charter declared that it would never again be involved in direct combat activities, but would be of a benevolent nature. The “supervisory” USAF organization overseeing CAP has changed several times. This has included the former Continental Air Command in 1959, the former Headquarters Command, USAF in 1968, to the Air University (AU) in 1976. Following Air University’s reassignment as a subordinate command to the Air Education and Training Command (AETC) in 1993, USAF oversight of CAP has flowed from AETC at the 4-star level, to AU at the 3-star level, to AU’s Jeanne M. Holm Center for Officer Accessions and Citizen Development at the 1-star level, to a subordinate unit of 1st Air Force at the 3-star level with Civil Air Patrol-U.S. Air Force as a stand-alone unit lead at the Colonel (O-6) level. Since its incorporation charter, CAP has maintained its relationship with the USAF, and has continued its three congressionally mandated missions.

During the 113th United States Congress, both the United States Senate and the United States House of Representatives voted to pass a bill that would award the Congressional Gold Medal to the World War II members of the Civil Air Patrol. The medal would be presented “in recognition of their military service and exemplary record during World War II.” 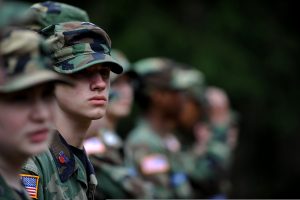 Civil Air Patrol has five congressionally mandated missions:
To provide an organization to encourage and aid citizens of the United States in contributing their efforts, services, and resources in developing aviation and in maintaining air supremacy; and encourage and develop by example the voluntary contribution of private citizens to the public welfare.

To provide aviation education and training especially to its senior and cadet members.
To encourage and foster civil aviation in local communities.
To provide an organization of private citizens with adequate facilities to assist in meeting local and national emergencies.
To assist the Department of the Air Force in fulfilling its non-combat programs and missions.
The organization condenses these mandates into three core missions, which Civil Air Patrol was chartered with by Congress in 1946: aerospace education, cadet programs and emergency services.

For more information on this topic, visit it’s page on Wikipedia.org