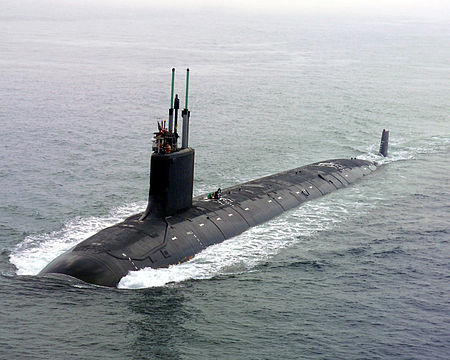 Over the course of American History, there have been three ships given the name USS Iowa, with plans for a fourth.  Here is a brief history of each.

USS Iowa (BB-4) was a United States Navy battleship. It was the first ship commissioned in honor of Iowa and was America’s first seagoing battleship. Iowa saw substantial action in the Spanish–American War. While she was an improvement over the Indiana class because of a superior design, the warship became obsolete quickly in the first quarter of the 20th century, and was used for target practice and sunk on 23 March 1923 in Panama Bay by a salvo of 14-inch shells.

Read more about the USS Iowa (BB-4) on Wikipedia.org.

USS Iowa (BB-53) was the fifth of six South Dakota class battleships, laid down in 1920 but never completed. They would have been the last dreadnoughts in the Naval Act of 1916 to be commissioned had the Washington Naval Treaty not caused their cancellation one-third of the way through their construction.  They would have been the largest, most heavily armed and armored battleships in the U.S. Navy and, designed to achieve 23 knots (43 km/h), represented an attempt to abandon its 21-knot (39 km/h) standardized fleet speed and catch up with the increasing fleet speeds of its main rivals, the British Royal Navy and Imperial Japanese Navy. In this, size and secondary armament, they represented a break from the Standard-type battleship that had dominated American capital ship design for the prior five ship classes, while their use of standardized bridges, lattice masts and other features was a continuation of this practice and the increase in the number of main guns from the preceding Colorado class had long been standard U.S. naval policy. The main restriction to which they had to adhere was the ability to pass through the Panama Canal.

Read more about the USS Iowa (BB-53) at Wikipedia.org.

During World War II, she carried President Franklin D. Roosevelt across the Atlantic to Mers El Kébir, Algeria, en route to a crucial 1943 meeting in Tehran with Prime Minister Winston Churchill of Britain and Josef Stalin, leader of the Soviet Union. She has a bathtub—an amenity installed for Roosevelt, along with an elevator to shuttle him between decks.[1] When transferred to the Pacific Fleet in 1944, Iowa shelled beachheads at Kwajalein and Eniwetok in advance of Allied amphibious landings and screened aircraft carriers operating in the Marshall Islands. She also served as the Third Fleet flagship, flying Adm. William F. Halsey‘s flag at the Japanese surrender in Tokyo Bay. During the Korean War, Iowa was involved in raids on the North Korean coast, after which she was decommissioned into the United States Navy reserve fleets, better known as the “mothball fleet.” She was reactivated in 1984 as part of the 600-ship Navy plan and operated in both the Atlantic and Pacific Fleets to counter the recently expanded Soviet Navy. In April 1989, an explosion of undetermined origin wrecked her No. 2 gun turret, killing 47 sailors.

Read more about the USS Iowa (BB-61) at Wikipedia.org

Finally, Iowa (SSN-797), a Virginia-class submarine, will be the fourth U.S. Navy ship named for the state of Iowa. Secretary of the Navy Ray Mabus officially announced the name on September 2, 2015, during a news briefing at Iowa State University.