This month we decided to add a little bonus and create a post that focuses on two events, instead of one.  Both events took place after WWII, during the cold war, the first at the very beginning, the last at the very end. 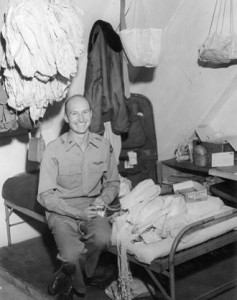 Colonel Gail Seymour “Hal” Halvorsen (born October 10, 1920) is a retired career officer and command pilot in the United States Air Force. He is well known as the original Candy Bomber or the “Rosinenbomber” in Germany and a recipient of the Congressional Gold Medal.[1] He piloted C-47s and C-54s during the Berlin airlift (“Operation Vittles”) from 1948–1949.

During the Berlin Airlift, Gail Halvorsen flew one of the innumerable C-54 cargo aircraft ferrying supplies into Berlin, then deep in the Soviet sector of control in Germany. On his days off, he went sightseeing in Berlin and shot film on his personal handheld movie camera. On one such visit, he saw thirty children lined up behind a fence at Tempelhof airport, the main landing site for the airlift. He went to meet them and noticed these kids had nothing without the aid of the US air force. He looked into his pocket and took out some candy to give to the kids who hadn’t had any sweets for years. He realized that he did not have enough candy for thirty but gave to the kids anyway; they didn’t fight for it, instead they let the ones who got it keep it. Halvorsen thought for a moment and decided that he would drop candy out of his C-54. The kids asked how they would know what plane was his. He replied, “I’ll wiggle my wings,” hence his nickname, “Onkel Wackelflügel” (Uncle Wiggly Wings). 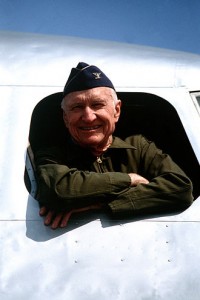 When Halvorsen got back to base, he used his ration to get candy and asked his friends to contribute. The next step was to improvise parachutes so he didn’t hurt the kids; they used extra clothes and handkerchiefs. In the morning when they did regular supply drops, they also dropped three boxes of candy attached to handkerchiefs. They did these drops once a week; the children began sending the parachutes back along with letters and artwork.

When word reached the airlift commander, Lieutenant General William H. Tunner, he ordered it expanded into Operation “Little Vittles,” a play on the overall airlift’s name of Operation Vittles. As news of Operation Little Vittles reached the United States, children and candymakers from all over the US began contributing candy. Public support led to donations, which enabled Halvorsen and his crew to drop 850 pounds of candy. By the end of the airlift, around 25 plane crews had dropped 23 tons of chocolate, chewing gum, and other candies over various places in Berlin. The National Confectioners Association donated large amounts to the effort, and American schoolchildren helped attach the candies to parachutes.

With the groundswell of support, Little Vittles pilots, of which Halvorsen was now one of many, were dropping candy every other day. Children all over Berlin had sweets, and more and more artwork was getting sent back with kind letters attached to them. The American candy bombers became known as the Rosinenbomber (Raisin Bombers), but Halvorsen himself became known by many nicknames to the children of Berlin, including his original moniker of “Uncle Wiggly Wings,” as well as “The Chocolate Uncle” and “The Chocolate Flier.”

You can read more about Gail Halverson on Wikipedia.org.

The Berlin Wall (German: Berliner Mauer) was a barrier that divided Berlin from 1961 to 1989. Constructed by the German Democratic Republic (GDR, East Germany), starting on 13 August 1961, the wall completely cut off (by land) West Berlin from surrounding East Germany and from East Berlin until it was opened in November 1989. Its demolition officially began on 13 June 1990 and was completed in 1992. The barrier included guard towers placed along large concrete walls, which circumscribed a wide area (later known as the “death strip”) that contained anti-vehicle trenches, “fakir beds” and other defenses. The Eastern Bloc claimed that the wall was erected to protect its population from fascist elements conspiring to prevent the “will of the people” in building a socialist state in East Germany. In practice, the Wall served to prevent the massive emigration and defection that marked East Germany and the communist Eastern Bloc during the post-World War II period.

The Berlin Wall was officially referred to as the “Anti-Fascist Protective Wall” (German: Antifaschistischer Schutzwall) by GDR authorities, implying that the NATO countries and West Germany in particular were “fascists” by GDR propaganda. The West Berlin city government sometimes referred to it as the “Wall of Shame“—a term coined by mayor Willy Brandt—while condemning the Wall’s restriction on freedom of movement. Along with the separate and much longer Inner German border (IGB), which demarcated the border between East and West Germany, it came to symbolize the “Iron Curtain” that separated Western Europe and the Eastern Bloc during the Cold War.

Before the Wall’s erection, 3.5 million East Germans circumvented Eastern Bloc emigration restrictions and defected from the GDR, many by crossing over the border from East Berlin into West Berlin; from which they could then travel to West Germany and other Western European countries. Between 1961 and 1989, the wall prevented almost all such emigration. During this period, around 5,000 people attempted to escape over the wall, with an estimated death toll ranging from 136 to more than 200 in and around Berlin.

In 1989, a series of radical political changes occurred in the Eastern Bloc, associated with the liberalization of the Eastern Bloc’s authoritarian systems and the erosion of political power in the pro-Soviet governments in nearby Poland and Hungary. After several weeks of civil unrest, the East German government announced on 9 November 1989 that all GDR citizens could visit West Germany and West Berlin. Crowds of East Germans crossed and climbed onto the wall, joined by West Germans on the other side in a celebratory atmosphere. Over the next few weeks, euphoric people and souvenir hunters chipped away parts of the wall; the governments later used industrial equipment to remove most of what was left. Contrary to popular belief the wall’s actual demolition did not begin until the summer of 1990 and was not completed until 1992. The fall of the Berlin Wall paved the way for German reunification, which was formally concluded on 3 October 1990.

For more information on the Berlin Wall, see Wikipedia.org