The United States Marine Corps traces its roots to the Continental Marines of the American Revolutionary War, formed by Captain Samuel Nicholas by a resolution of the Second Continental Congress on 10 November 1775, to raise two battalions of Marines. That date is regarded and celebrated as the date of the Marine Corps’ birthday. At the end of the American Revolution, both the Continental Navy and Continental Marines were disbanded in April 1783. The institution itself would not be resurrected until 11 July 1798. At that time, in preparation for the Quasi-War with France, Congress created the United States Marine Corps. Marines had been enlisted by the War Department as early as August 1797 for service in the new-build frigates authorized by the Congressional “Act to provide a Naval Armament” of 18 March 1794, which specified the numbers of Marines to recruit for each frigate. 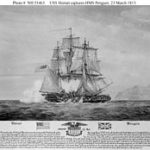 The Marines’ most famous action of this period occurred during the First Barbary War (1801–1805) against the Barbary pirates, when William Eaton and First Lieutenant Presley O’Bannon led eight Marines and 500 mercenaries in an effort to capture Tripoli. Though they only reached Derna, the action at Tripoli has been immortalized in the Marines’ hymn and the Mameluke Sword carried by Marine officers.