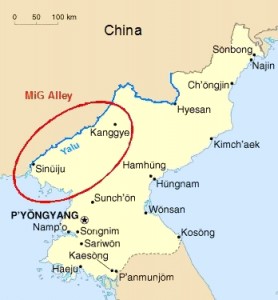 “MiG Alley” is the name given by United Nations (UN) pilots to the northwestern portion of North Korea, where the Yalu River empties into the Yellow Sea. During the Korean War, it was the site of numerous dogfights between UN fighter pilots and their opponents from North Korea (including some unofficially crewed by Soviet airmen) and the People’s Republic of China.

Soviet-built Mikoyan-Gurevich MiG-15 were the aircraft used during most of the conflict, and the area’s nickname was derived from them. It was the site of the first large-scale jet-vs-jet air battles, with the North American F-86 Sabre.

The North Koreans began their war against South Korea on June 25, 1950 with small numbers of Soviet aircraft retained from the Second World War. These were flown by under-trained and 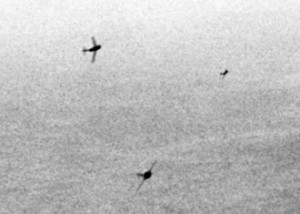 inexperienced pilots. Once the UN, led by the United States, committed its air power to the war, the North Korean force was rapidly depleted. For several months U.S. built B-29s, P-51 Mustangs and the early jet F-80 Shooting Stars and F-84 Thunderjets flew the skies over North Korea virtually unopposed, while the North Koreans and their Soviet and Chinese advisors argued behind the scenes over the best course of counter-action to take.

By October 1950 the Soviet Union agreed to provide their air regiments to the conflict, equipped with high performance MiG-15 fighters along with their Soviet air crews and maintenance teams. At the same time the Kremlin committed to supply the Chinese and North Koreans with MiG-15 aircraft, and would train Chinese and Korean pilots to fly them.[citation needed] 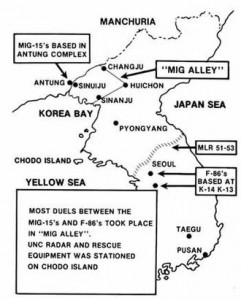 In response to North Korea’s deployment of jets, P-51 squadrons from the UN air forces converted to jet fighters: the F-86 in the case of USAF and South African Air Force (SAAF) and the Gloster Meteor by the Royal Australian Air Force (RAAF).

April 12, 1951 was nicknamed “Black Thursday” by USAF pilots after three MiG-15 squadrons with 30 aircraft attacked three squadrons of B-29 Superfortress bombers (36 planes) protected by about a hundred F-80 Shooting Star and F-84 Thunderjet fighters. The MiGs were fast enough to fly past the non-swept wing escorts and engage the B-29s. Three B-29s were shot down and seven more were damaged, with no casualties on the Soviet side.[3] Following this US sorties over Korea were halted for approximately three months. US Bomber command was forced to discontinue daylight attacks on Korea, and changed to night missions using small groups of bomber aircraft.

For more information on this topic, see the article on Wikipedia.org