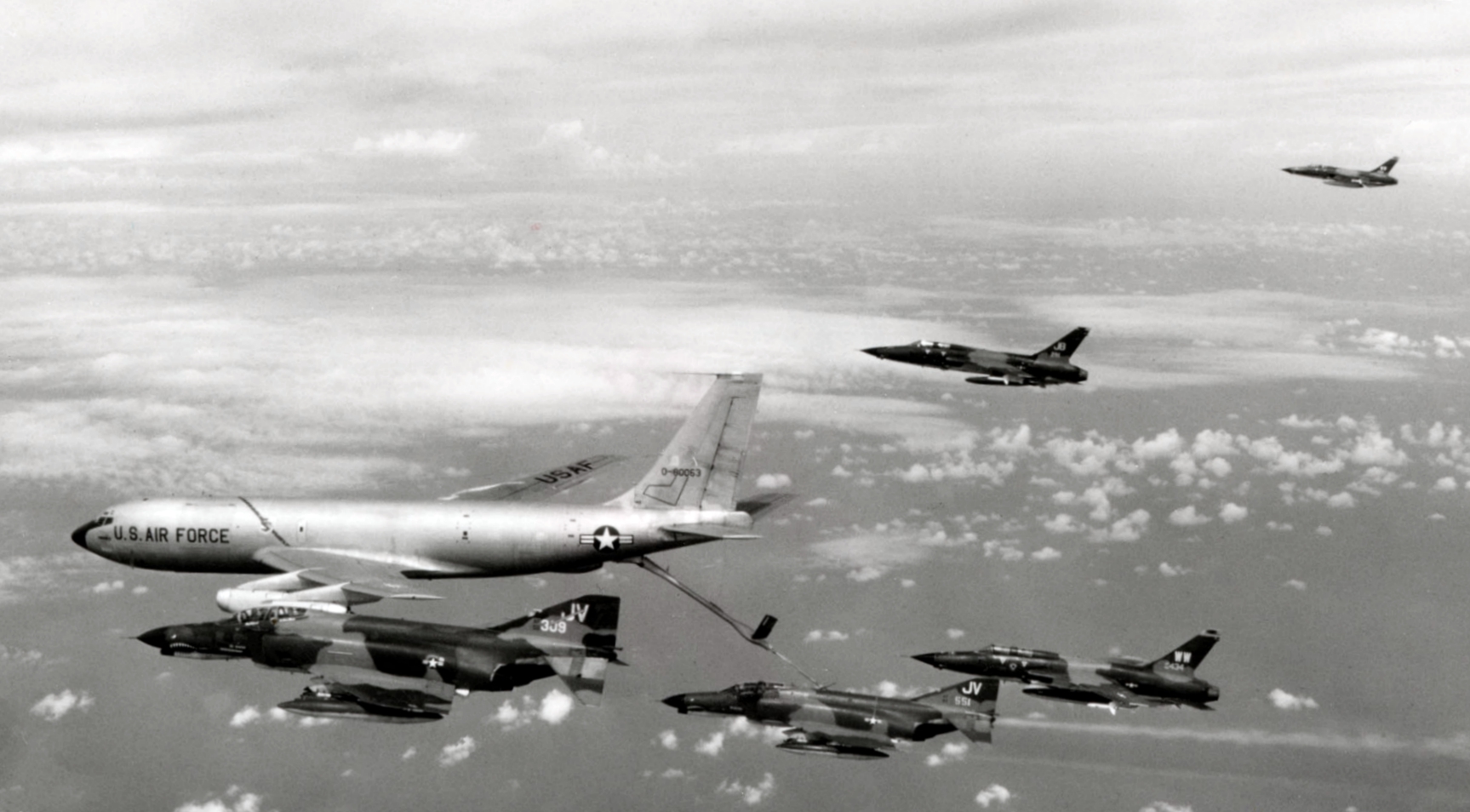 Operation Linebacker was the codename of a U.S. Seventh Air Force and U.S. Navy Task Force 77 air interdiction campaign conducted against the Democratic Republic of Vietnam (North Vietnam) from 9 May to 23 October 1972, during the Vietnam War.
Its purpose was to halt or slow the transportation of supplies and materials for the Nguyen Hue Offensive (known in the West as the Easter Offensive), an invasion of the Republic of Vietnam (South Vietnam) by forces of the People’s Army of Vietnam (PAVN) that had been launched on 30 March. Linebacker was the first continuous bombing effort conducted against North Vietnam since the end of Operation Rolling Thunder in November 1968.
Operation Linebacker, the designation for the new interdiction campaign, would have four objectives: to isolate North Vietnam from its outside sources of supply by destroying railroad bridges and rolling stock in and around Hanoi and northeastward toward the Chinese frontier; the targeting of primary storage areas and marshalling yards; to destroy storage and transshipment points; and finally, to eliminate (or at least damage) the North’s air defense system. With nearly 85 percent of North Vietnam’s imports (which arrived by sea) blocked by Pocket Money, the administration and the Pentagon believed that this would cut its final lines of communication with its socialist allies. The People’s Republic of China alone shipped an average of 22,000 tons of supplies a month over two rail lines and eight major roads that linked it with North Vietnam.
On 10 May Operation Linebacker and Operation Custom Tailor began with large-scale bombing operations against North Vietnam by tactical fighter aircraft of the Seventh Air Force and Task Force 77. Their targets included the railroad switching yards at Yên Viên and the Paul Doumer Bridge, on the northern outskirts of Hanoi.[38] A total of 414 sorties were flown on the first day of the operation, 120 by the Air Force and 294 by the Navy, and they encountered the heaviest single day of air-to-air combat during the Vietnam War, with 11 North Vietnamese MiGs (four MiG-21s and seven MiG-17s) and two U.S. Air Force F-4s shot down. Anti-aircraft artillery and over 100 surface-to-air missile firings also brought down two U.S. Navy aircraft.
By the end of the month, American aircraft had destroyed 13 bridges along the rail lines running from Hanoi to the Chinese border. Another four were destroyed between the capital and Haiphong, including the notorious Thanh Hóa Bridge. Several more bridges were brought down along the rail line leading to the south toward the DMZ. Targets were then switched to petroleum and oil storage and transportation networks and North Vietnamese airfields. There was an immediate impact on the battlefield in South Vietnam. Shelling by PAVN artillery dropped off by one-half between 9 May and 1 June. This slowdown was not due to an immediate shortage of artillery shells, but rather to a desire to conserve ammunition. U.S. intelligence analysts believed that PAVN had enough stockpiled supplies to sustain their campaigns throughout the autumn.
T

he intensity of the bombing campaign was reflected by the sharp increase in the number of strike and support sorties flown in Southeast Asia as a whole: from 4,237 for all services, including the VNAF, during the month preceding the invasion, to 27,745 flown in support of ARVN forces from the beginning of April to the end of June (20,506 of them flown by the Air Force). B-52s provided an additional 1,000 sorties during the same period. The North was feeling the pressure, admitting in the official PAVN history that “between May and June only 30 percent of supplies called for in our plan actually reached the front-line units.” In total, 41,653 Linebacker I missions dropped 155,548 tons of bombs.
In addition to interdicting the road and rail system of North Vietnam, Linebacker also systematically attacked its air defense system. The North Vietnamese Air Force, with approximately 200 interceptors, strongly contested these attacks throughout the campaign. Navy pilots, employing a mutually supporting “loose deuce” tactical formation and many with TOPGUN training, enjoyed a kill ratio of 6:1 in their favor in May and June, such that after that the North Vietnamese rarely engaged them thereafter. In contrast, the Air Force experienced a 1:1 kill ratio through the first two months of the campaign, as seven of its eventual 24 Linebacker air-to-air losses occurred without any corresponding North Vietnamese loss in a twelve-day period between 24 June and 5 July. Air Force pilots were hampered by use of the outdated “fluid four” tactical formations (a four-plane, two element formation in which only the leader did the shooting and in which the outside wingmen were vulnerable) dictated by service doctrine. Also contributing to the parity was a lack of air combat training against dissimilar aircraft, a deficient early warning system, and ECM pod formations that mandated strict adherence to formation flying. During August, however, the introduction of real-time early warning systems, increased aircrew combat experience, and degraded North Vietnamese ground control interception capabilities reversed the trend to a more favorable 4:1 kill ratio.
Linebacker saw several other “firsts”. On the opening day of the operation, Navy Lieutenant Randall H. Cunningham and his radar intercept officer, Lieutenant (j.g.) William P. Driscoll became the first U.S. air aces of the Vietnam War when they shot down their fifth MiG. On 28 August, the Air Force gained its first ace when Captain Richard S. Ritchie downed his fifth enemy aircraft. Twelve days later, Captain Charles B. DeBellevue (who had been Ritchie’s backseater during four of his five victories) downed two more MiGs, bringing his total to six. On 13 October another weapons officer, Captain Jeffrey S. Feinstein, was credited with his fifth MiG, making him the final Air Force ace.
For more information on Operation Linebacker read the full article on Wikipedia.org!