We have heard of all the great battles and ones that made great headlines, but this is just a simple battle during WWII that few have heard of.  The reality is that this small battle changed how the Japanese had to change their tactics and reassess their campaign in the Soloman Islands. 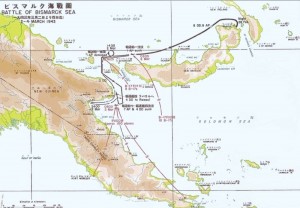 The Battle of the Bismarck Sea (2–4 March 1943) took place in the South West Pacific Area (SWPA) during World War II when aircraft of the U.S. Fifth Air Force and the Royal Australian Air Force (RAAF) attacked a Japanese convoy carrying troops to Lae, New Guinea. Most of the task force was destroyed, and Japanese troop losses were heavy.

The Japanese convoy was a result of a Japanese Imperial General Headquarters decision in December 1942 to reinforce their position in the South West Pacific. A plan was devised to move some 6,900 troops from Rabaul directly to Lae. The plan was understood to be risky, because Allied air power in the area was strong, but it was decided to proceed because otherwise the troops would have to be landed a considerable distance away and march through inhospitable swamp, mountain and jungle terrain without roads before reaching their destination. On 28 February 1943, the convoy – comprising eight destroyers and, eight troop transports with an escort of approximately 100 fighters – set out from Simpson Harbor in Rabaul. 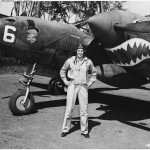 The Allies had detected preparations for the convoy,  and codebreakers in Melbourne (FRUMEL)  and Washington, had decrypted and translated messages indicating the convoy’s intended destination and date of arrival. The Allied Air Forces had developed new techniques they hoped would improve the chances of successful air attack on ships. They detected and shadowed the convoy, which came under sustained air attack on 2–3 March 1943. Follow-up attacks by PT boats and aircraft were made on 4 March. All eight transports and four of the escorting destroyers were sunk.

The battle was a disaster for the Japanese. Out of 6,900 troops who were badly needed in New Guinea, only about 1,200 made it to Lae. Another 2,700 were rescued by destroyers and submarines and returned to Rabaul. The Japanese made no further attempts to reinforce Lae by ship, greatly hindering their ultimately unsuccessful efforts to stop Allied offensives in New Guinea.

The Allies lost 13 aircrew, 10 of whom were lost in combat while three others died in an accident. There were also eight wounded. Aircraft losses were one B-17 and three P-38s in combat, and one B-25 and one Beaufighter in accidents. 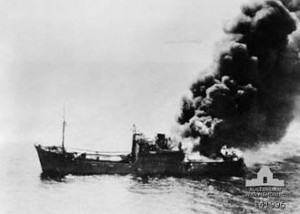 There was no doubt that the Japanese had suffered a major defeat. Imamura’s chief of staff flew to Imperial General Headquarters to report on the disaster. It was decided that there would be no more attempts to land troops at Lae.  The losses incurred in the Bismarck Sea caused grave concern for the security of Lae and Rabaul. This resulted in a change of strategy. On 25 March a joint Army-Navy Central Agreement on South West Area Operations gave operations in New Guinea priority over those in the Solomon Islands campaign. The XVIII Army was allocated additional shipping, ordnance and anti-aircraft units, which were sent to Wewak or Hansa Bay.  Of the defeat, Rabaul staff officer Masatake Okumiya said, “Our losses for this single battle were fantastic. Not during the entire savage fighting at Guadalcanal did we suffer a single comparable blow. We knew we could no longer run cargo ships or even fast destroyer transports to any front on the north coast of New Guinea, east of Wewak.

For more information see Wikipedia, the free encyclopedia and Battle of the Bismarck Sea.