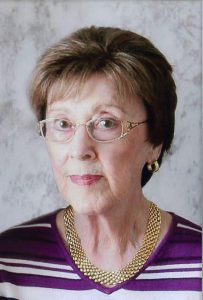 Norma was born on February 17, 1922, in Bremer, Iowa, the daughter of Earl Scott Hill and Edrie Valerie (Scott) Hill. Norma was baptized on April 12, 1935 at the Methodist Church in Waverly. She attended the Waverly School System, graduating from the Waverly High School in 1941. On September 27, 1941, Norma was united in marriage to Harland J. Briner in Bethany, Missouri. Following their marriage, Harland entered the U.S. Army and the couple made their home in Waverly while Harland was in the service. Following Harland’s discharge in 1945, the couple raised their family in Waverly, Iowa. Harland died suddenly on October 8, 1972. Norma continued to make her home in Waverly and worked at The Villa and Hardmans Drug Store.

Norma was a faithful member of Trinity United Methodist Church in Waverly and also a member of the Waverly AMVETS Auxiliary. In her spare time she enjoyed Bowling, Counted Cross Stitch and all Crafts. But what gave Norma the most joy was spending time with “her girls”.