Operation Desert Shield began on 7 August 1990 when U.S. troops were sent to Saudi Arabia due also to the request of its monarch, King Fahd, who had earlier called for U.S. military assistance. Acting on the Carter Doctrine’s policy, and out of fear the Iraqi Army could launch an invasion of Saudi Arabia, U.S. President George H. W. Bush quickly announced that the U.S. would launch a “wholly defensive” mission to prevent Iraq from invading Saudi Arabia under the codename Operation Desert Shield.  This “wholly defensive” doctrine was quickly abandoned when, on 8 August, Iraq declared Kuwait to be Iraq’s 19th province and Saddam Hussein named his cousin, Ali Hassan Al-Majid, as its military-governor.

The U.S. Navy dispatched two naval battle groups built around the aircraft carriers USS Dwight D. Eisenhower and USS Independence to the Gulf, where they were ready by 8 August. The U.S. 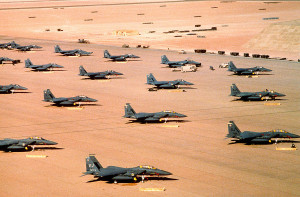 also sent the battleships USS Missouri and USS Wisconsin to the region. A total of 48 U.S. Air Force F-15s from the 1st Fighter Wing at Langley Air Force Base, Virginia, landed in Saudi Arabia, and immediately commenced round the clock air patrols of the Saudi–Kuwait–Iraq border to discourage further Iraqi military advances. They were joined by 36 F-15 A-Ds from the 36th Tactical Fighter Wing at Bitburg, Germany. The Bitburg contingent was based at Al Kharj Air Base, approximately 1-hour southeast of Riyadh. The 36th TFW would be responsible for 11 confirmed Iraqi Air Force aircraft shot down during the war. There were also two Air National Guard units stationed at Al Kharj Air Base, the South Carolina Air National Guard’s 169th Fighter Wing flew bombing missions with 24 F-16s flying 2,000 combat missions and dropping 4 million pounds of munitions, and the New York Air National Guard’s 174th Fighter Wing from Syracuse flew 24 F-16s on bombing missions. Military buildup continued from there, eventually reaching 543,000 troops, twice the number used in the 2003 invasion of Iraq. Much of the material was airlifted or carried to the staging areas via fast sealift ships, allowing a quick buildup. 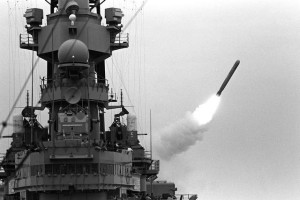 The Gulf War began with an extensive aerial bombing campaign on 17 January 1991. The Coalition flew over 100,000 sorties, dropping 88,500 tons of bombs,[93] and widely destroying military and civilian infrastructure. The air campaign was commanded by USAF Lieutenant General Chuck Horner, who briefly served as U.S. Central Command’s Commander-in-Chief – Forward, while General Schwarzkopf was still in the U.S.  A day after the deadline set in Resolution 678, the Coalition launched a massive air campaign, which began the general offensive code named Operation Desert Storm. The first priority for Coalition forces was the destruction of Iraq’s Air Force and anti-aircraft facilities. The sorties were launched mostly from Saudi Arabia and the six Coalition carrier battle groups (CVBG) in the Persian Gulf and Red Sea.

The next Coalition targets were command and communication facilities. Saddam Hussein had closely micromanaged Iraqi forces in the Iran–Iraq War, and initiative at lower levels was discouraged. Coalition planners hoped that Iraqi resistance would quickly collapse if deprived of command and control. 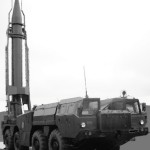 The air campaign’s third and largest phase targeted military targets throughout Iraq and Kuwait were Scud missile launchers, weapons research facilities, and naval forces. About one-third of the Coalition’s air power was devoted to attacking Scuds, some of which were on trucks and therefore difficult to locate. U.S. and British special operations forces had been covertly inserted into western Iraq to aid in the search for and destruction of Scuds.

Iraqi anti-aircraft defenses, including Man-portable air-defense systems, were surprisingly ineffective against Coalition aircraft and the Coalition suffered only 75 aircraft losses in over 100,000 sorties, 44 of which were the result of Iraqi action. Two of these losses are the result of aircraft colliding with the ground while evading Iraqi ground fired weapons. One of these losses is a confirmed air-air victory.

U.S. decoy attacks by air attacks and naval gunfire the night before Kuwait’s liberation were designed to make the Iraqis believe the main Coalition ground attack would focus on central Kuwait.

For months, American units in Saudi Arabia had been under almost constant Iraqi artillery fire, as well as threats from Scud missile or chemical attacks. On 24 February 1991, the 1st and 2nd 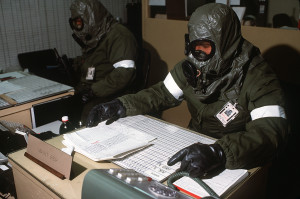 Marine Divisions, and the 1st Light Armored Infantry Battalion crossed into Kuwait and headed toward Kuwait City. They encountered trenches, barbed wire, and minefields. However, these positions were poorly defended, and were overrun in the first few hours. Several tank battles took place, but apart from that, Coalition troops encountered minimal resistance, as most Iraqi troops surrendered. The general pattern was that the Iraqis would put up a short fight before surrendering. However, Iraqi air defenses shot down nine U.S. aircraft. Meanwhile, forces from Arab states advanced into Kuwait from the east, encountering little resistance and suffering few casualties.

Kuwaiti forces were tasked with liberating the city. Iraqi troops offered only light resistance. The Kuwaitis lost one soldier killed and one plane shot down, and quickly liberated the city. On 27 February, Saddam ordered a retreat from Kuwait, and President Bush declared it liberated.

For further reading, please refer to the Wikipedia article on the “Golf War“.