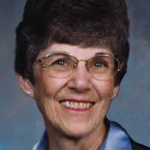 Ramona was born on April 19, 1930, in Clarksville, Iowa, the daughter of Theodore and Linda (Buchholz) Becker. She was raised in Clarksville where she was baptized on June 29, 1930 and confirmed on March 25, 1945, at St. John Lutheran Church and graduated from the Clarksville High School in 1947. On October 8, 1950, Ramona was united in marriage to Robert D. Bailey at St. John Lutheran Church in Clarksville. During her life Ramona lived in Clarksville and Waverly where she was employed by CUNA Mutual Insurance. She holds the record for the most years of employment at CUNA starting there on May 26, 1947, in the filing department and later in payroll department as payroll accountant. She retired on June 1, 1996, after forty nine years of service.