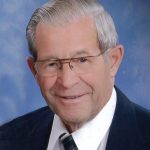 Ray was born on February 14, 1925, in Clarksville, Iowa, the son of Grace (Arenholz) and Klaus Mehmen. He attended country school near Clarksville until 7th grade. He then farmed with his family before going to work as a plumber’s journeyman for Laurence Bantz in Waverly. He later worked for Bill Eichmann with his plumbing business. On November 18, 1945, he was united in marriage to Josephine G. Wait at St. John’s Lutheran Church, Clarksville; the couple made their home in Waverly. Ray worked for a time at Sheild Bantam Company (Terex) in Waverly, and in 1948, the couple moved to Steamboat Springs, Colorado, where their son Alan was born. In 1951 they returned to Waverly and Ray worked for Waverly Plumbing and Heating for 19 years. In July of 1969, he established Ray Mehmen Plumbing, Heating & Cooling in Waverly until he retired.

Ray was a member of St. John’s Lutheran Church in Waverly. He and Jo enjoyed traveling. He was an avid supporter of Waverly-Shell Rock sports, especially basketball and baseball. Ray was a very hard-working man; he and Jo lovingly supported their church, family and friends.

Ray is survived by his wife of 72 years, Jo; two brothers, Jake Mehmen of Greene, and Henry (Velda) Mehmen of Shell Rock; and many nieces and nephews. His family, not of blood, but by Heart include, Diane and Bernie Farrell with their children, Brandy (Corey) Smith; and Carrie Jo (Brian) Bisbee, and grandchildren, Isaac, Eli, Sam, Elle, Nolan and Simon; and Dennis and Ronda Happel with their children, Brian Happel, Neil (Deda) Happel, Kristin Happel, and Derek Happel, and grandchildren, Owen, Evan, Callen, Ethan, Tori and Prentice; Carolyn Happel; and Charlie (Michelle) Johnson. He was preceded in death by his son, Alan; two brothers, Ralph Mehmen and Koert Miller; and a sister Carrie Gambaiani.