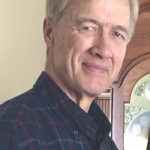 Robert (Bob) Allan Longmuir, Jr., (age 70) of Clarksville, Iowa, was born in Oelwein, Iowa, on July 27, 1946, the son of Robert and Leona (Klingman) Longmuir. Bob was baptized at St. Sebald Lutheran Church in Volga, Iowa and confirmed at St. John Lutheran Church, Arlington, Iowa. He spent most of his school years at Arlington Community School, where he was active in sports, as well as, helping with all the chores and fieldwork on the family farm. He graduated from the Arlington Community School in 1964 and enrolled at the State College of Iowa in Cedar Falls, now UNI. In 1966, he enlisted in the US Army Security Agency for four years. He spent his first year in Turkey. After returning to the US, Bob married his high school sweetheart, Janice Schmidt, in 1967 at St. John Lutheran Church, Arlington, Iowa. Bob and Jan then spent the next two and one half years in Okinawa for the remainder of his Army career. While there, they were able to travel to Japan, Hong Kong, Thailand, and Taiwan. Upon their return to the US, they resumed their education at UNI. They had the opportunity to be custodians for the Lutheran Student Center and were enriched by their closeness with the campus pastor and friends there.
Bob received his BA degree in Business Education in 1972 and began teaching in the Clarksville Community School District. He coached basketball, golf, and started the girls’ softball program in 1972. After receiving his Master’s Degree in Educational Administration in 1977, Bob became the activities director at the Newton School District. That same year, they were blessed to adopt a baby boy, Scott. Later Bob became the business manager for the school district in Carroll for two years. In 1979, they were blessed with being able to adopt a second child, Jennifer. Wanting to return to family and friends in northeast Iowa, Bob acquired the business manager position for the Independence School District. While there, he was an active member and state officer for the Association of School Business Officials in Iowa. In 1983, Bob earned his superintendent’s certification from UNI and assumed his first superintendent’s position in Hudson.
In 1987, he became the superintendent for the New Hampton School District, a position he held for the next 17 years. He was a very active member of the community, along with his many school responsibilities. He was a member and president of the Rotary Club, as well as, a member of the Industrial Corporation. He was on the committee to build the Chickasaw Wellness Complex after writing and receiving a construction grant from the state to kick-off the project. He was a member of the Iowa Superintendent’s Finance and Leadership Consortium since its inception in 1997. He presented school finance seminars at the statewide level for superintendents and business managers. He also presented at the Iowa School Board conventions. Bob was a highly recognized and valued expert in school finance by school districts across the state.
Bob took early retirement in 2004, and after only a few months, he became the part-time superintendent for the Tripoli School District. In 2006, Bob and Jan returned to Clarksville when he became part-time superintendent there. While in Clarksville, he continued to be active in school finance seminars and became a consultant for various school districts. He was the treasurer for the St. John Lutheran Church for six years, was a member of the AMVETS organization, and most recently became a member of the board for the area golf course.
In his years as a superintendent, he cared greatly about the students in all aspects of their education – from academics to fine arts to sports. He attended many extracurricular activities to show his support for them.
Despite his busy work schedules through the years, he made time for Jan, his children and grandchildren. Family was such an important part of his life. Trips together, playing ball, attending church, spending time with grandparents and other family members, and providing support to his children and grandchildren in all areas of their lives made him a great role model.
He retired in 2011 and became a regular at the morning downtown coffee group, golfed regularly both in New Hampton and Clarksville, enjoyed the longtime friendship with his card club group, and loved traveling with Jan to areas in the United States and Canada.
Bob passed away after a sudden illness on Thursday, March 23, 2017, at Allen Memorial Hospital, Waterloo, Iowa. He was preceded in death by his parents, Robert and Leona Longmuir, and his brother, Jim.
Bob is survived by his wife of nearly 50 years, Jan; one son, Scott (Liz) Longmuir, Carmel, Indiana; one daughter, Jennifer O’Donnell, Byron, Minnesota; five grandchildren – Sierra, Taylor, Caden, Carson, and Sydney; one brother, Ron (Rosemary) Longmuir, Manchester; one sister, Mila (Kim) Smith, Shell Rock, and nieces and nephews.
Full article at Kaiser-Corson Funeral Home