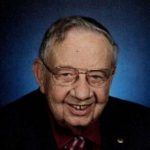 Bob was born on June 6, 1928, in Osage, Iowa, the son of Ruth G. (Tubbs) and Ernest E. Coonradt. At the age of five, he moved to Waverly where he attended school, and graduated from Waverly High School in 1946. He attended the University of Iowa and graduated in 1950 with a BS in Business Administration. Bob served in the 2nd Armored Division of the United States Army in Europe from 1950 until his honorable discharge in 1952. On May 12, 1956, Bob was united in marriage to Delores C. Rader at St. Joseph Catholic Church in Waterloo, Iowa. In 1952, Bob joined his father at Waverly Motor Company which later became Coonradt Ford, which was in business for 85 years. He retired in October of 2018.

Bob was a member of St. Mary Catholic Church, Waverly Amvets Post #79, and the Waverly Chamber of Commerce. He was also a member and past president of Rotary Club and Waverly Golf and Country Club. He enjoyed hunting and fishing in Canada with family and close friends. He liked playing cards and was an accomplished golfer. He also enjoyed traveling and ventured to Puerto Vallarta every year with Dee and other family members.