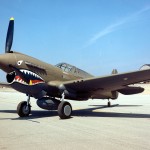 The 1st American Volunteer Group (AVG) of the Chinese Air Force in 1941–1942, nicknamed the Flying Tigers, was composed of pilots from the United States Army Air Force, the Navy and the Marine Corps.   The shark-faced nose art of the Flying Tigers remains among the most recognizable image of any individual combat aircraft or combat unit of World War II. During the summer and fall 1941, before Pearl Harbor, some 300 men carrying civilian passports boarded ships destined for Burma. They were initially based at a British airfield in Toungoo for training while their aircraft were assembled and test flown by CAMCO personnel at Mingaladon Airport outside Rangoon. Chennault set up a schoolhouse that was made necessary because many pilots had “lied about their flying experience, claiming pursuit experience when they had flown only bombers and sometimes much less powerful airplanes. They called Chennault “the Old Man” due to his much older age and leathery exterior obtained from years flying open cockpit pursuit aircraft in the Army Air Corps.  The AVG was created by an executive order of Generalissimo Chiang Kai-shek. He did not speak English, however, and Chennault never learned to speak Chinese. As a result, all communications between the two men were routed through Soong Mei-ling, or “Madame Chiang” as she was known to Americans, and she was designated the group’s “honorary commander.”

The 100 P-40 aircraft were crated and sent to Burma on third country freighters during spring 1941. At Rangoon, they were unloaded, assembled and test flown by personnel of Central Aircraft Manufacturing Company (CAMCO) before being delivered to the AVG training unit at Toungoo.   One crate was dropped into the water and a wing assembly was ruined by salt water immersion, so CAMCO was able to deliver only 99 Tomahawks before war broke out. (Many of those were destroyed in training accidents.) The 100th fuselage was trucked to a CAMCO plant in Loiwing, China, and later made whole with parts from damaged aircraft. Shortages in equipment with spare parts almost impossible to obtain in Burma along with the slow introduction of replacement fighter aircraft were continual impediments although the AVG did receive 50 replacement P-40E fighters from USAAF stocks toward the end of its combat tour. 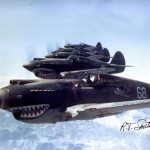 The group consisted of three fighter squadrons of around 30 aircraft each. It trained in Burma before the American entry into World War II with the mission of defending China against Japanese forces. The groups of volunteers were officially members of the Chinese Air Force. The group first saw combat on 20 December 1941, 12 days after Pearl Harbor (local time). It demonstrated innovative tactical victories when the news in the U.S. was filled with little more than stories of defeat at the hands of the Japanese forces, and achieved such notable success during the lowest period of the war for both the U.S. and the Allied Forces as to give hope to America that it might eventually defeat the Japanese. AVG pilots earned official credit, and received combat bonuses, for destroying 296 enemy aircraft  while losing only 14 pilots in combat.  The combat records of the AVG still exist and researchers have found them credible. On 4 July 1942 the AVG was disbanded. It was replaced by the 23rd Fighter Group of the United States Army Air Forces, which was later absorbed into the U.S. Fourteenth Air Force with General Chennault as commander. The 23rd FG went on to achieve similar combat success, while retaining the nose art on the left-over P-40s. Chennault preached a radically different approach to air combat based on his study of Japanese tactics and equipment, his observation of the tactics used by Soviet pilots in China, and his judgment of the strengths and weaknesses of his own aircraft and pilots.  When Japanese aircraft attacked, Chennault’s doctrine called for pilots to take on enemy aircraft in teams from an altitude advantage, since their aircraft were not as maneuverable or as numerous as the Japanese fighters they would encounter. He prohibited his pilots from entering into a turning fight with the nimble Japanese fighters, telling them to execute a diving or slashing attack and to dive away to set up for another attack. This “dive-and-zoom” technique was contrary to what the men had learned in U.S. service.  AVG fighter aircraft were painted with a large shark face on the front of the aircraft. About the same time, the AVG was dubbed “The Flying Tigers” by its Washington support group, called China Defense Supplies.  The P-40’s good qualities included pilot armor, self-sealing fuel tanks, sturdy construction, heavy armament, and a higher diving speed than most Japanese aircraft – qualities that could be used to advantage in accordance with Chennault’s combat tactics.  Chennault created an early warning network of spotters that would give his fighters time to take off and climb to a superior altitude where this tactic could be executed.

For more information on the AVG, check out the page on Wikipedia.org