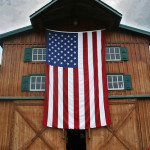 U.S. flag hanging on a barn

Over farmlands and town squares, atop skyscrapers and capitol buildings, the American flag soars. It reminds us of our history — 13 colonies that rose up against an empire — and celebrates the spirit of 50 proud States that form our Union today. On Flag Day and during National Flag Week, we pay tribute to the banner that weaves us together and waves above us all.

For more than two centuries, Americans have saluted Old Glory in times of trial and triumph. Generations have looked to it as they steeled their resolve, and an unbroken chain of men and women in uniform has served under our flag. From the banks of Baltimore’s Inner Harbor to European trenches and Pacific islands, from the deserts of Iraq to the mountains of Afghanistan, they have risked their lives so we might live ours. When we lay our veterans to rest, many go draped with the stars and stripes upon them, and their families find solace in the folds of honor held tightly to their chest. Because of their sacrifice, our Nation is stronger, safer, and will always remain a shining beacon of freedom for the rest of the world.

With a familiar design that has evolved along with a growing Nation, our flag stitches the ideals for which America was born to the reality of our times. It reminds us that fidelity to our founding principles requires new responses to new challenges. As we prepare to meet the great tests of our age, let every American draw inspiration from this symbol of our past, our present, and our common dreams.

To commemorate the adoption of our flag, the Congress, by joint resolution approved August 3, 1949, as amended (63 Stat. 492), designated June 14 of each year as “Flag Day” and requested that the President issue an annual proclamation calling for its observance and for the display of the flag of the United States on all Federal Government buildings. The Congress also requested, by joint resolution approved June 9, 1966, as amended (80 Stat. 194), that the President annually issue a proclamation designating the week in which June 14 occurs as “National Flag Week” and call upon citizens of the United States to display the flag during that week.