From the Commander:  Before reading about this WWII battle, I want you to picture that this small island was approximately 400 acres in size and the highest point is about 10 feet above sea level.

The Battle of Tarawa

across the mid-Pacific, to the Philippines, and into Japan, the U.S. needed to take the Marianas Islands. The Marianas were heavily defended. Naval doctrine of the time held that in order for attacks to succeed, land-based aircraft would be required to weaken defenses and provide some measure of protection for the invasion forces. The nearest islands capable of supporting such an effort were the Marshall Islands, northeast of Guadalcanal. Taking the Marshalls would provide the base needed to launch an offensive on the Marianas but the Marshalls were cut off from direct communications with Hawaii by a garrison and air base on the small island of Betio, on the western side of Tarawa Atoll in the Gilbert Islands. Thus, to eventually launch an invasion of the Marianas, the battles had to start far to the east, at Tarawa. 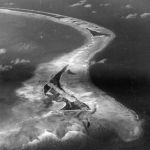 Aerial view of Betio where landing strip was located.

Located about 2,400 miles southwest of Pearl Harbor, Betio is the largest island in the Tarawa Atoll. The small, flat island lies at the southernmost reach of the lagoon, and was home to the bulk of the Japanese defenders. Shaped roughly like a long, thin triangle, the tiny island is approximately two miles long. It is narrow, being only 800 yards wide at the widest point.

The Battle of Tarawa was fought from November 20 to November 23, 1943. It took place at the Tarawa Atoll in the Gilbert Islands, located in what is now the nation of Kiribati. Nearly 6,400 Japanese, Koreans, and Americans died in the fighting, mostly on and around the small island of Betio.

The Battle of Tarawa was the first American offensive in the critical central Pacific region. It was also the first time in the war that the United States faced serious Japanese opposition to an amphibious landing. Previous landings met little or no initial resistance, but this time the 4,500 Japanese defenders were well-supplied and well-prepared, and they fought almost to the last man, exacting a heavy toll on the United States Marine Corps which were incurred within the space of 76 hours.

More information can be found at Wikipedia