The Gulf War
The Iraqi Army‘s occupation of Kuwait that began 2 August 1990 was met with international condemnation, and brought immediate economic sanctions against Iraq by members of the U.N. Security Council. U.S. President George H. W. Bush deployed U.S. forces into Saudi Arabia, and urged other countries to send their own forces to the scene. An array of nations joined the Coalition, the largest military alliance since World War II. The great majority of the Coalition’s military forces were from the U.S., with Saudi Arabia, the United Kingdom and Egypt as leading contributors, in that order. Saudi Arabia paid around US$36 billion of the US$60 billion cost.[17]

The war was marked by the introduction of live news broadcasts from the front lines of the battle, principally by the U.S. network CNN.[18][19][20] The war has also earned the nickname Video Game War after the daily broadcast of images from cameras on board U.S. bombers during Operation Desert Storm.[21][22] 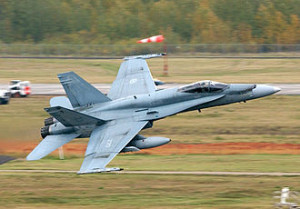 bombardment on 17 January 1991, continuing for five weeks. This was followed by a ground assault on 24 February. This was a decisive victory for the Coalition forces, who liberated Kuwait and advanced into Iraqi territory. The Coalition ceased its advance, and declared a cease-fire 100 hours after the ground campaign started. Aerial and ground combat was confined to Iraq, Kuwait, and areas on Saudi Arabia’s border. Iraq launched Scud missiles against Coalition military targets in Saudi Arabia and against Israel.

For months, American units in Saudi Arabia had been under almost constant Iraqi artillery fire, as well as threats from Scud missile or chemical attacks. On 24 February 1991, the 1st and 2nd Marine Divisions, and the 1st Light Armored Infantry Battalion crossed into Kuwait and headed toward Kuwait City. They encountered trenches, barbed wire, and minefields. However, these positions were poorly defended, and were overrun in the first few hours. Several tank battles took place, but apart from that, Coalition troops encountered minimal resistance, as most Iraqi troops surrendered. The general pattern was that the Iraqis would put up a short fight before surrendering. However, Iraqi air defenses shot down nine U.S. aircraft. Meanwhile, forces from Arab states advanced into Kuwait from the east, encountering little resistance and suffering few casualties.

Kuwaiti forces were tasked with liberating the city. Iraqi troops offered only light resistance. The

Kuwaitis lost one soldier and one plane that was shot down, and quickly liberated the city. On 27 February, Saddam ordered a retreat from Kuwait, and President Bush declared it liberated. However, an Iraqi unit at Kuwait International Airport appeared not to have gotten the message, and fiercely resisted. U.S. Marines had to fight for hours before securing the airport, after which Kuwait was declared secure. After four days of fighting, Iraqi forces were expelled from Kuwait. As part of a scorched earth policy, they set fire to nearly 700 oil wells, and placed land mines around the wells to make extinguishing the fires more difficult.