From the Commander:  Just another follow up to last month’s Military History and the history of island hopping in the Pacific.  Although not widely published or reported, there were people back in the U.S. that opposed the lose of life during this time on islands nobody knew existed and wondered why soldiers were dying on these “God forsaken shores”.  A point to remember is General MacArthur’s promise to the Philippine people that he would return. In April 2008, I was fortunate enough to visit the Philippines with my wife and two couples from Post 49 and we visited Corregidor and truly received a lesson in History. 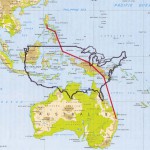 An overlay of the U.S. over the many islands in the south Pacific. to give an idea of distances.

The Battle of Cape Gloucester was a battle in the Pacific theater of World War II between Japanese and Allied forces which took place on the island of New Britain, Territory of New Guinea, between late December 1943 and April 1944.

The battle was a major part of Operation Cartwheel, the main Allied strategy in the South West Pacific Area and Pacific Ocean Areas during 1943–44, and was the second World War II landing of the U.S. 1st Marine Division, after Guadalcanal.

The main objective of the American and Australian allies was the capture and expansion of the Japanese military airfield at Cape Gloucester. This was to contribute to the increased isolation and harassment of the major Japanese base at Rabaul. A secondary goal was to ensure free Allied sea passage through the straits separating New Britain from New Guinea.

Supporting operations for the landings in Cape Gloucester began on 15 December, when the U.S. Army‘s 112th Cavalry Regiment was landed at Arawe on the south-central coast to block the route of Japanese reinforcements and supplies from east to west and as a diversionary attack from the future Cape Gloucester landings. 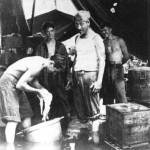 Although they lost the opening battle, the Japanese did not concede Arawe to the Americans without further struggle. Beginning on the afternoon of the invasion, 15 December 1943, and continuing for the next several days, they launched furious air attacks, especially targeting ships that had supported the assault. In addition, two nearby Japanese infantry battalions advanced on Arawe and dug in just beyond the American perimeter.

Beyond dealing with night-long battles, the Marines had to cope with Cape Gloucester’s terrible winter weather. Day after day of monsoon rains flooded the kitchens (causing the men to eat watery soup) and flooded the rearward tents (for those fortunate-enough to sleep in tents instead of outdoor hammocks covered with mosquito netting). 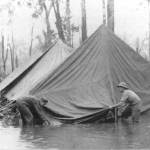 Wet uniforms never really dried, and the men suffered continually from fungus infections, the so-called jungle rot, which readily developed into open sores. Mosquito-borne malaria threatened the health of the Marines, who also had to contend with other insects—”little black ants, little red ants, big red ants,” on an island where “even the caterpillars bite.”

Why did anyone care about these hot, malaria-infested places?  General MacArthur believed capturing Cape Gloucester, and other island locations with good harbors, was indispensable for his plan to recapture Japanese-occupied sections of the Philippines.  All the military services, and especially the Allied navies, required logistical bases to resupply their forces, repair their equipment, treat their wounded, and support their fighting elements.

Credits go to:  Wikipedia and www.history.army.mil