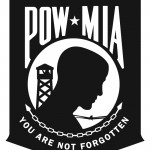 Since September 18th, 2015 (third Friday in September) is proclaimed POW/MIA day, I thought it appropriate that a little history of this flag and day be inserted.  Please take the time to read and then time to pray, think about or just extend kind thoughts to the families and friends that still are waiting for some accounting of their family members.  At the beginning of 2015, a new agency, Defense POW/MIA Accounting Agency, was created due to many problems found with the old JPAC and others.  Following is information taken from the web site of the new agency and Wikipedia’s POW/MIA.

Defense POW/MIA Accounting Agency brings together the former Defense Prisoner of War Missing Personnel Office (DPMO), the Joint Prisoner of War/Missing in Action Accounting Command (JPAC), and the Life Sciences Equipment Laboratory (LSEL). Consolidating the Department’s personnel accounting assets will lead to better oversight of family resources and services, research, and operations. The agency will enable the workforce to achieve the fullest possible accounting for our missing personnel, better anticipate family needs, and adapt to changes in the DoD and the United States Government. The agency will also honor our veterans’ sacrifices and confirm an obligation made to those serving our country.

The POW/MIA flag is an American flag designed as a symbol of citizen concern about United States military personnel taken as prisoners of war (POWs) or listed as missing in action (MIA).

The POW/MIA flag was created by the National League of Families and officially recognized by the Congress in conjunction with the Vietnam War POW/MIA issue, “as the symbol of our Nation’s concern and commitment to resolving as fully as possible the fates of Americans still prisoner, missing and unaccounted for in Southeast Asia, thus ending the uncertainty for their families and the Nation.”

The original design for the flag was created by Newt Heisley in 1972[1] The National League of Families then-national coordinator, POW wife Evelyn Grubb, oversaw its development and also campaigned to gain its widespread acceptance and use by the United States government and also local governments and civilian organizations across the United States.[2][3]

In 1971, while the Vietnam War was still being fought, Grahme Wilkin, the wife of a service member missing in action and member of the National League of Families of American Prisoners and Missing in Southeast Asia, recognized the need for a symbol of U.S. POW/MIAs, some of whom had been held captivity for as many as seven years. The flag is black, and bears in the center, in black and white, the emblem of the league. The emblem was designed by Newt Heisley, and features a white disk bearing in black silhouette the bust of a man (Jeffery Heisley), watch tower with a guard on patrol, and a strand of barbed wire; above the disk are the white letters POW and MIA framing a white 5-pointed star; below the disk is a black and white wreath above the white motto: “You are not Forgotten.”[4] The POW/MIA was flown over the White House for the first time in September 1982[5] The flag has been altered many times; the colors have been switched from black with white – to red, white and blue – to white with black; the POW/MIA has at times been revised to MIA/POW.

On March 9, 1989, a league flag that had flown over the White House on the 1988 National POW/MIA Recognition Day was installed in the U.S. Capitol rotunda as a result of legislation passed by the 100th Congress. The league’s POW-MIA flag is the only flag ever displayed in the rotunda, and the only one other than the Flag of the United States to have flown over the White House. The leadership of both houses of Congress hosted the installation ceremony in a demonstration of bipartisan congressional support.

On August 10, 1990, the 101st Congress passed U.S. Public Law 101-355, recognizing the National League of Families POW/MIA Flag and designating it “as a symbol of our Nation’s concern and commitment to resolving as fully as possible the fates of Americans still prisoner, missing and unaccounted for in Southeast Asia, thus ending the uncertainty for their families and the Nation.” Beyond Southeast Asia, it has been a symbol for POW/MIAs from all U.S. wars.